Job seekers are encouraged to attend armed with resumes and ready to meet prospective employers. There is still time for employers to register to participate.

“It is our priority to connect employers and job seekers in San Bernardino County to create more opportunity for our residents and businesses to thrive,” said San Bernardino County Board of Supervisors Chairman James Ramos. “Our vision for this county includes facilitating access to prosperity for all who choose to reside here and enjoy the county’s unique advantages.”

Last year’s job fair attracted 1,325 job seekers, ages 18 to over 65. More than 700 job openings were offered by companies specializing in a range of industries including warehousing, manufacturing, technology, healthcare, education, construction and hospitality.

“Our job fairs are effective in helping local business find great local candidates,” said Sandy Harmsen, Executive Director of the San Bernardino County Workforce Investment Board.  “It is a great opportunity for employers to enjoy a one-stop shop for their recruitment needs.”

The job fair, “Local Jobs for Local Residents,” will run from 9 a.m. to noon on Aug. 20 at the San Bernardino County Fairgrounds at 14800 7th Street, Victorville.

To secure a free booth, please register at http://conta.cc/1K72LZc.  Employers must book their place by Aug. 18.

Employers and job seekers who are interested in the Workforce Investment Board programs may call: (800) 451-JOBS or visit www.csb-win.org. Also follow us on: Facebook;Twitter @InlandEmpireJob; and YouTube http://www.youtube.com/SBCountyWIB.

Board applauds deal to bring ONT under local control 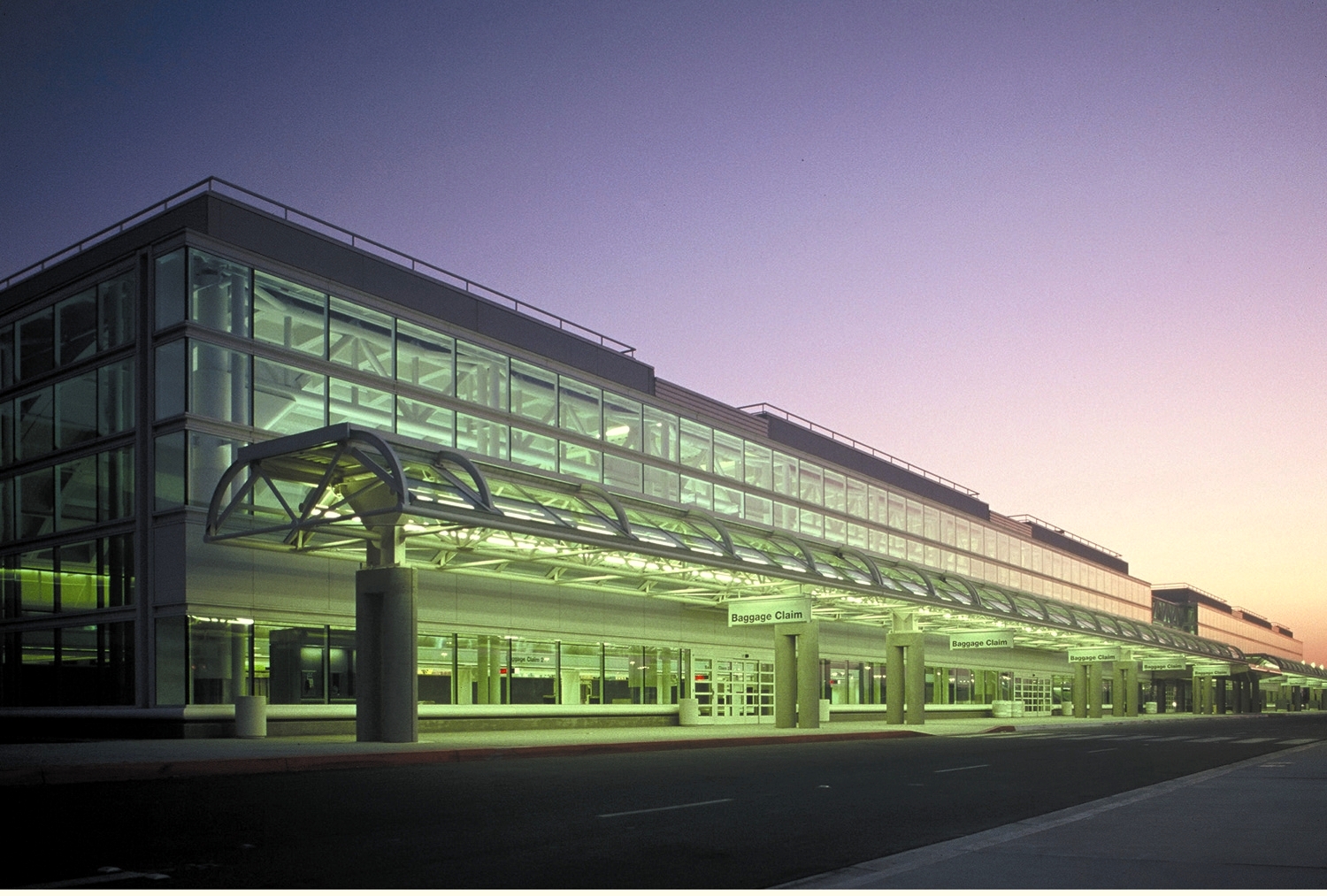 The Board of Supervisors celebrated the agreement announced today to return Ontario International Airport to local control.

“I am pleased that there will no longer be concern that the airport is being held back from realizing its full potential,” said Fourth District Supervisor Curt Hagman. “As the only airport in the Southern California region that is not legally constrained by a maximum number of passengers, Ontario Airport has tremendous potential for growth and becoming a major transportation hub. I look forward to being closely involved with the transition and future success of the airport.”

For years, the Board of Supervisors has supported the efforts to set Ontario International Airport free from the ownership of Los Angeles World Airports for the benefit of our residents, visitors and businesses. In August 2013, the Board of Supervisors convened a special study session to discuss the decline of the airport and how to bring it back to serve our growing population and bolster our continued economic recovery.

“Ontario Airport is a critical asset to the success of the Inland Empire. We have been working towards this goal for some time and I am pleased that the economic future of our region looks brighter,” said Hagman, whose district includes Ontario International Airport. “Regaining local control of the airport allows our region to control its own destiny and will no doubt be a major driver of the county’s economy and the region’s economy.”

“Regaining local control of the airport is excellent news for our county,” Ramos said.  “I applaud all efforts made by the parties involved in reaching this agreement.”

“Local ownership of ONT is a critical component in the Inland Empire’s effort to ensure continued economic recovery and continued growth,” said Robert A. Lovingood, Vice Chairman of the Board. “This will make our Inland Empire communities the desired areas within Southern California to live, work, and play.”

“Our challenge now is making the airport thrive to benefit our local economy,” said Second District Supervisor Janice Rutherford. “The airline industry has changed dramatically since the Great Recession and we now have to find and market ONT’s competitive advantage in this new market.”

“The Ontario Airport represents new economic and job development opportunities for our residents,” said Fifth District Supervisor Josie Gonzales. “Regaining local control of the airport ensures it will be used to the benefit of our region.” 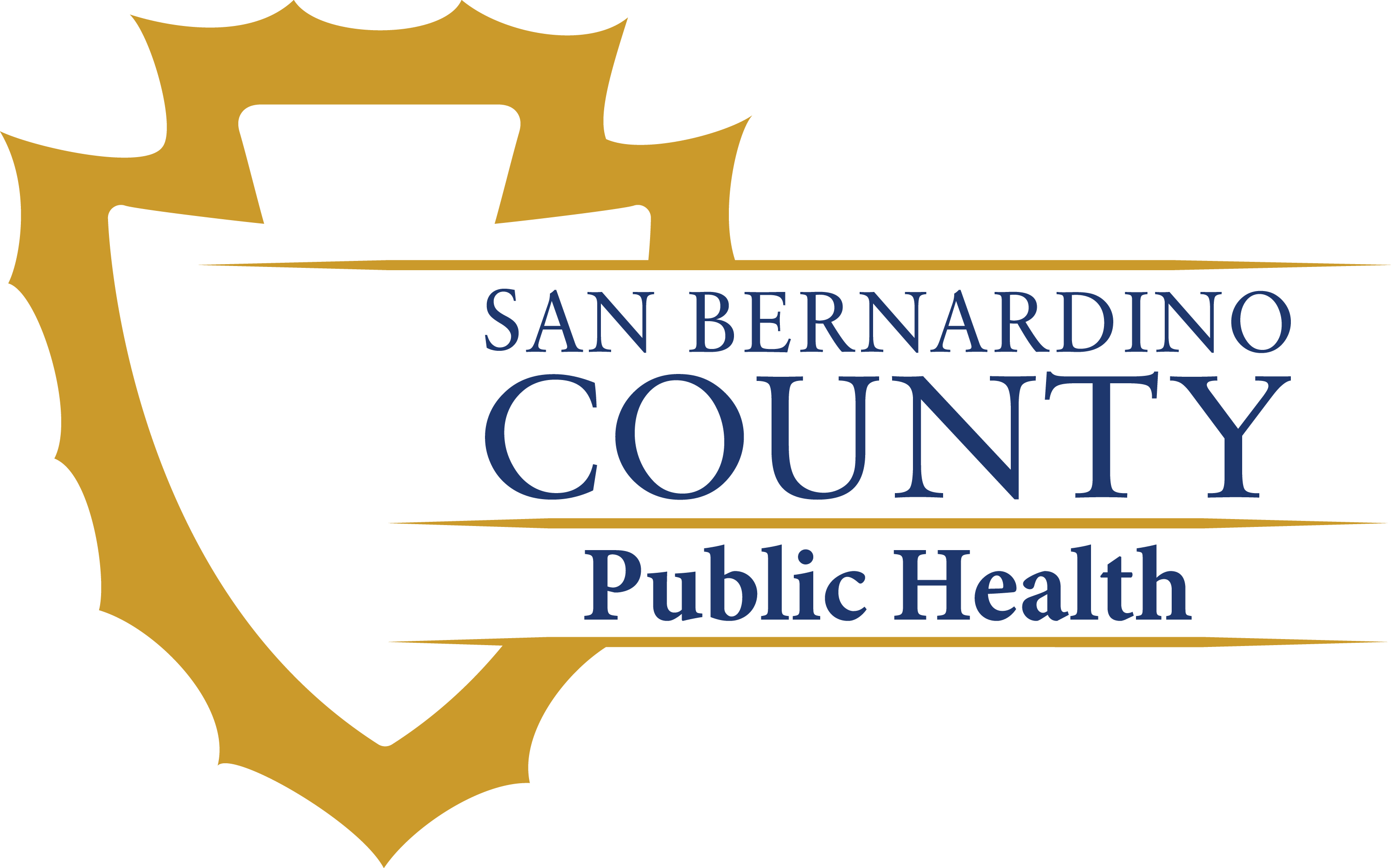 Two human cases of West Nile Virus (WNV) have been confirmed in San Bernardino County. These are the first confirmed human cases within the County this year. At this time last year, the County had a total of two confirmed cases of WNV. As of August 3, 2015, the California Department of Public Health has confirmed a total of eight human cases of WNV and one WNV-related death within the state.
“We strongly encourage the public to be aware of the WNV activity in their area and take action to protect themselves and their family by taking appropriate precautionary measures,” said Dr. Maxwell Ohikhuare, County of San Bernardino Health Officer. “West Nile virus infection can cause serious disease; therefore, prevention is essential.”
WNV is transmitted to humans through the bite of an infected mosquito. Signs and symptoms of WNV may include fever, body aches, rash, nausea, vomiting and headache. Most people infected with the virus have no symptoms. However, some people may develop severe symptoms which can lead to brain inflammation or paralysis. The most effective way to avoid WNV infection is to prevent mosquito bites.
San Bernardino County residents can protect themselves from mosquito bites by taking the following precautions:
• DAWN and DUSK – Avoid spending time outside when mosquitoes are most active.
• DRESS – Wear shoes, socks, long pants and long-sleeved shirts that are loose fitting and light colored.
• DRAIN – Remove or drain all standing water around your property where mosquitoes lay eggs (birdbaths, ponds, old tires, buckets, clogged gutters or puddles from leaky sprinklers).
• DEET – Apply insect repellent containing DEET. When using DEET, be sure to read and follow the label instructions.
• DOORS – Make sure doors and windows have tight-fitting screens. Repair or replace screens that have tears or holes to prevent mosquitoes from entering the home.
• REPORT – Report green or neglected pools by calling 1 (800) 442-2283. Press 3 when prompted.
The public can participate in the WNV surveillance program by reporting dead birds to the state’s WNV toll-free hotline at (877) WNV-BIRD (968-2473) or at www.westnile.ca.gov.
For more information on WNV, visit the San Bernardino County Mosquito and Vector Control Program at http://1.usa.gov/1N5qvuM or call the Communicable Disease Section (CDS) at
1 (800) 722-4794.

Published August 6, 2015 | By County of San Bernardino | Leave a comment

Do you have what it takes for the SAF Showdown? 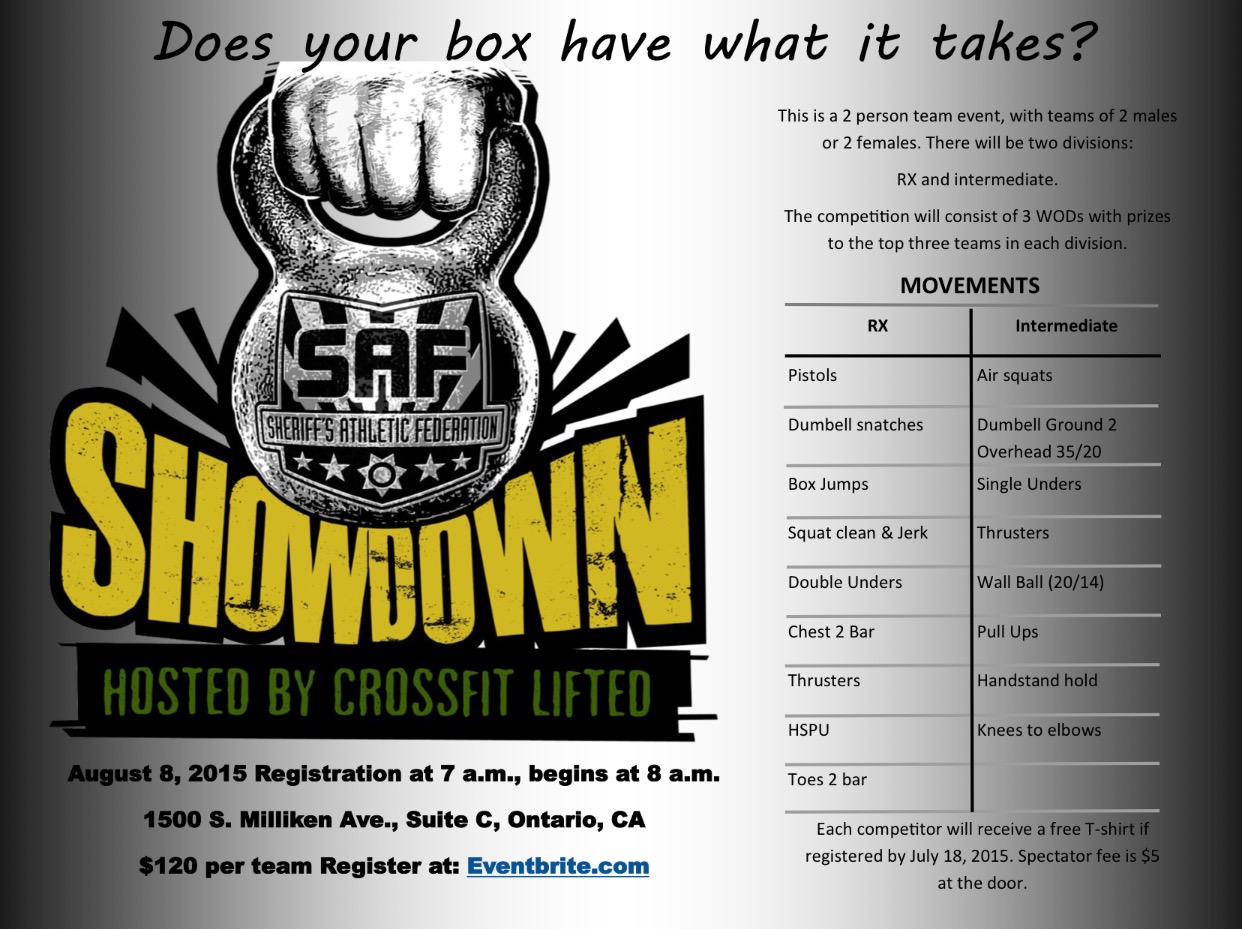 The Sheriff’s Athletic Federation is having its inaugural fitness competition on Aug. 8 at CrossFit Lifted, 1500 S. Milliken Avenue, Suite C  in Ontario.

The Showdown begins with a 7 a.m. registration; the competition begins at 8 a.m. Functional fitness experts from the Sheriff’s Athletic Federation in collaboration with trainers at CrossFit Lifted have created a challenging course designed to test the skill and determination of SAF Showdown contestants. The event is a two-person team showdown with teams of two women or two men. For more information about the competition, click here.

All proceeds from the event benefit the Sheriff’s Athletic Federation and are used to sponsor fitness activities such as the SBSD Mud Run, the Police and Fire Olympics, the annual Baker to Vegas relay race as well as free fitness challenges and healthy living campaigns.

To register, visit www.eventbrite.com and search for the SAF Showdown or follow the SAF on Facebook at San Bernardino Sheriff’s Mud Run.

Published August 4, 2015 | By County of San Bernardino | Leave a comment

Do you or someone you know need assistance with child support?

August is Child Support Awareness Month and the San Bernardino County Department of Child Support Services will be coordinating its outreach efforts to raise local awareness of the services offered to the community.

Visit the Child Support Services web site at hss.sbcounty.gov/dcss or call (866) 901-3212 to learn about the services the department offers.

By raising awareness about the services it provides, Child Support Services directly supports the Countywide Vision to facilitate family self-sufficiency and reduce childhood poverty throughout the county.