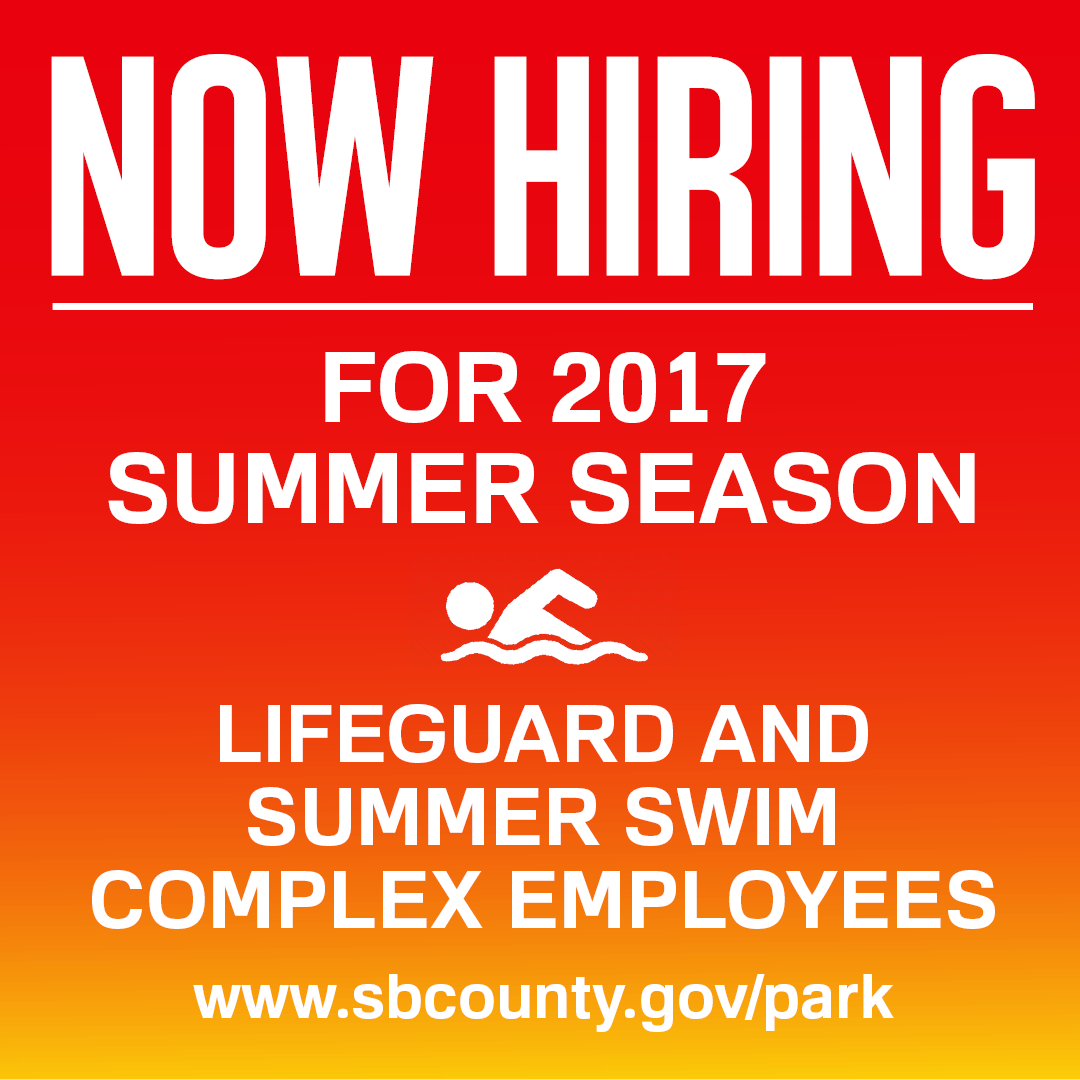 From Memorial Day weekend through Labor Day weekend the San Bernardino County Regional Parks opens its swim complexes for families to enjoy. We would like to invite any interested candidates to apply as a Lifeguard or Summer Swim Complex employee, at one of our Regional Parks for the 2017 Summer Season.

The following positions are available for the 2017 Summer Swim Season:

An investigation by the state into the county’s handling of workers’ compensation cases related to the Dec. 2, 2015 terrorist attack in San Bernardino found that treatment denials have been rare, indicates delays have been caused chiefly by doctors failing to submit information needed to approve treatments, and credits the county with establishing a model for dealing with incidents of this nature by hiring nurse case

“No workers’ compensation program anywhere in the country has ever been called upon to serve such a large number of seriously injured and traumatized survivors of a terror attack,” Chairman Lovingood said. “This has been unchartered territory for the county, for the doctors, and most certainly for the survivors. But the state’s investigation shows the county has worked hard and effectively to ensure safe, and complete care for the employees injured during this horrific attack. This has been the county’s priority since that fateful day.”

The numbers contained in the report bear out that denials, although frustrating when they occur, were the exception rather than the rule.

There have been a total of 2,146 requests for treatment from health care providers serving the 58 survivors being treated through workers’ compensation. 2,000 of those 2,146 requests for surgeries, prescriptions, physical therapy, counseling, and other medical treatments were approved. Among the 144 treatments that were denied, 68 appeals were filed by 11 employees. Only nine of the denials, representing less than one half of 1 percent of the total number of requests, were overturned on appeal.

Delays are more difficult to define and measure. However, the state’s investigation found a significant number of cases involving “a provider’s failure to provide an adequate clinical rationale or appropriate documentation to justify requests for extended or new prescriptions, extended or alternative therapies, or special equipment that veered away from standard medical treatment guidelines and limits.“

A lack of adequate information would have rendered the county unable to approve a treatment in a timely manner. In some cases, employees complained to the county about not having treatments approved before the county had even received requests from their providers.

“Often because (employees’) doctors had failed to document or fully explain their requests, employees who were still suffering and expected their doctors’ recommendations to be followed were frustrated by the denials,” said George Parisotto, Acting Administrative Director for the state Division of Workers’ Compensation, in a letter accompanying the report.

“The fact that several requests were denied and then authorized upon further review suggests that better communication by providers to the County’s claims administrators and better documentation at the time requests were first submitted might have reduced the number of UR (utilization review) denials and IMR (independent medical review) requests,” the report stated.

The report also pointed out:

–Because the county employees who were injured that day were on the job, “the County’s employees were both entitled and required to seek compensation from the County through California’s workers’ compensation system,” which is designed to prevent employers from interfering in the treatment of injured workers.

–“Workers’ compensation is, by design, very detailed and formulaic in specifying what compensation is due for specific types of injuries.” State fee schedules govern what must be paid for specific treatments. Any deviation has to be justified by the patient’s doctor. This is significant because in some cases treatments were denied because what the doctors wanted to charge far exceeded the state fee schedule.

–“Similar to Medicare and private health insurance plans”, workers’ compensation requires employers to have a utilization review program. “A decision to deny or modify a request can only be made by a licensed physician with expertise in the clinical issues raised,” the report stated.