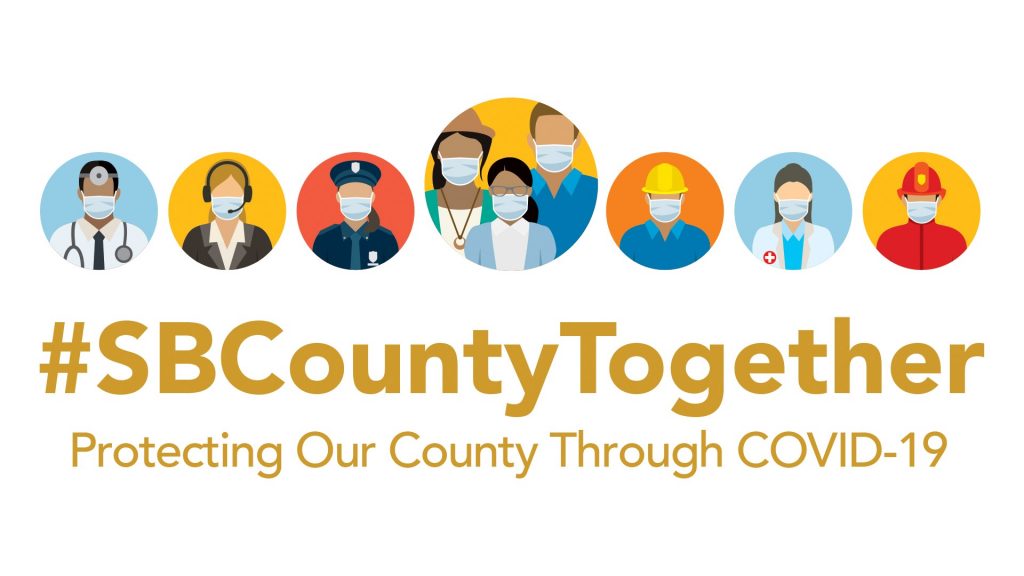 The County Update publishes on Fridays and as needed to share important County news, currently highlighting our battle against COVID-19. We remain here for you. #SBCountyTogether 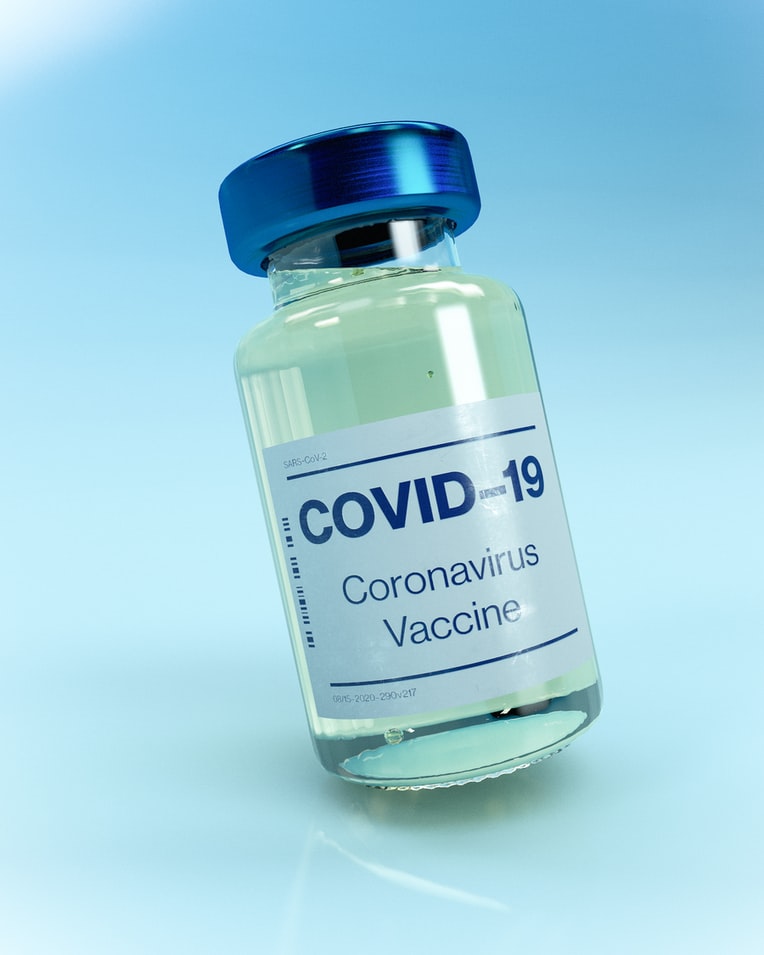 The Food and Drug Administration (FDA) has approved booster vaccines for both Moderna and Johnson & Johnson recipients. The County, healthcare providers, and pharmacies will administer boosters countywide as soon as they are approved by the State, which could be very soon.

Federal authorities also indicated people could mix and match the Johnson & Johnson vaccine with a booster shot of the Pfizer or Moderna mRNA vaccines to improve immune response to the virus. However, the County is awaiting additional recommendations on mixing and matching brands to be released by the Centers for Disease Control and Prevention (CDC) and the State before action is taken locally.

Last month, the federal government announced people who are immunocompromised could receive third doses of Pfizer and Moderna vaccines six months following their second shot. Regulators also announced last month that people ages 65 and older, residents in long-term care settings, people 18 to 64 with underlying medical conditions or at increased risk for COVID-19 exposure and transmission because of occupational or institutional setting could get a Pfizer booster six months following their last shot.

Thursday’s announcement now means those same guidelines apply for people who previously received Moderna who have been waiting for approval to receive their booster. Also, adults 18 and older who received the single-dose Johnson & Johnson may now get a booster of any brand two months after their initial shot.

The County will provide the latest booster vaccines as soon as Monday and people can make an appointment at myturn.ca.gov or vaccines.gov to find a provider.

County Health Centers will also be offering Moderna boosters and are located at:

Moderna is also readily available at a number of pharmacies and health care providers. If you need assistance finding an appointment for your booster, please call the COVID-19 hotline at (909) 387-3911, Monday through Friday from 9 a.m. to 5 p.m. 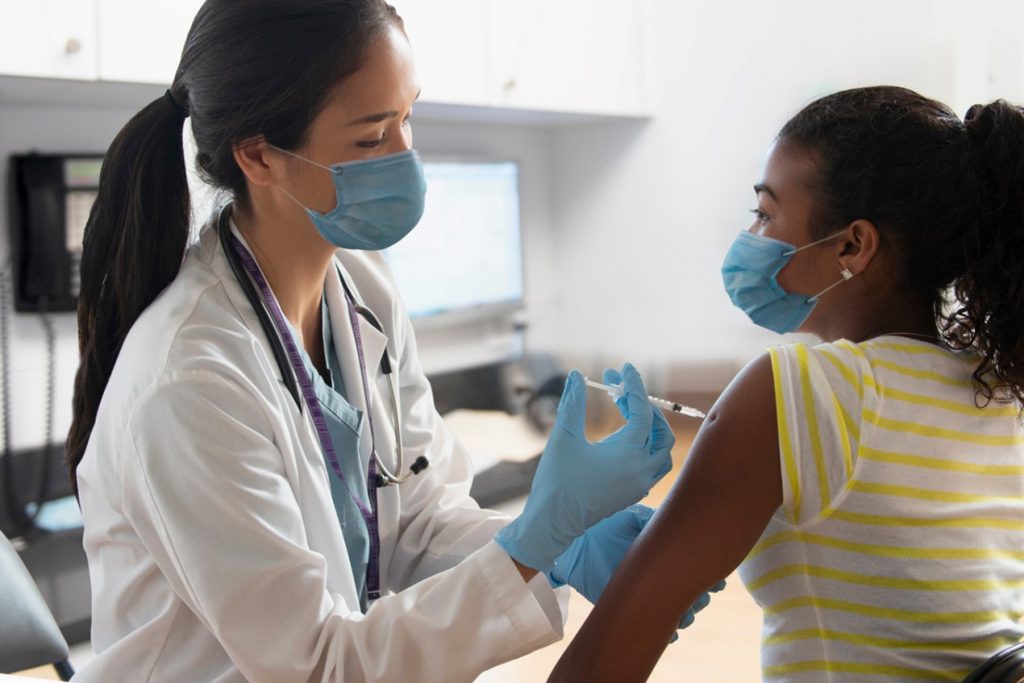 An advisory panel of the Food and Drug Administration (FDA) is set to meet on Tuesday, Oct. 26 to discuss approval of the Pfizer-BioNTech vaccine for children ages 5 to 11.

Pfizer submitted data to the FDA early in October seeking emergency use authorization of the vaccine for younger children. Currently, the vaccine is only approved for use for children ages 12 and older.

If federal authorities at the FDA and Centers for Disease Control and Prevention (CDC) approve the Pfizer vaccine for emergency use for children, the Western States Scientific Safety Review Workgroup and the California Department of Public Health would conduct their own evaluations and determine when and if providers in California, including the County, can begin to administer the vaccines.

The Pfizer vaccine for children ages 5 to 11 is a lower dose and comes in different packaging to distinguish it from the one for people ages 12 and up. The Pfizer vaccines already in stock cannot be used because of the different dosing amounts. Orders for the children’s vaccine may begin to arrive in counties throughout California in early November, if approved.

Once the vaccine is here, residents will be able to make appointments for their children at myturn.ca.gov or vaccines.gov. We’ll keep you updated once the vaccine is available in an upcoming edition of the County Update and our website at sbcovid19.com. 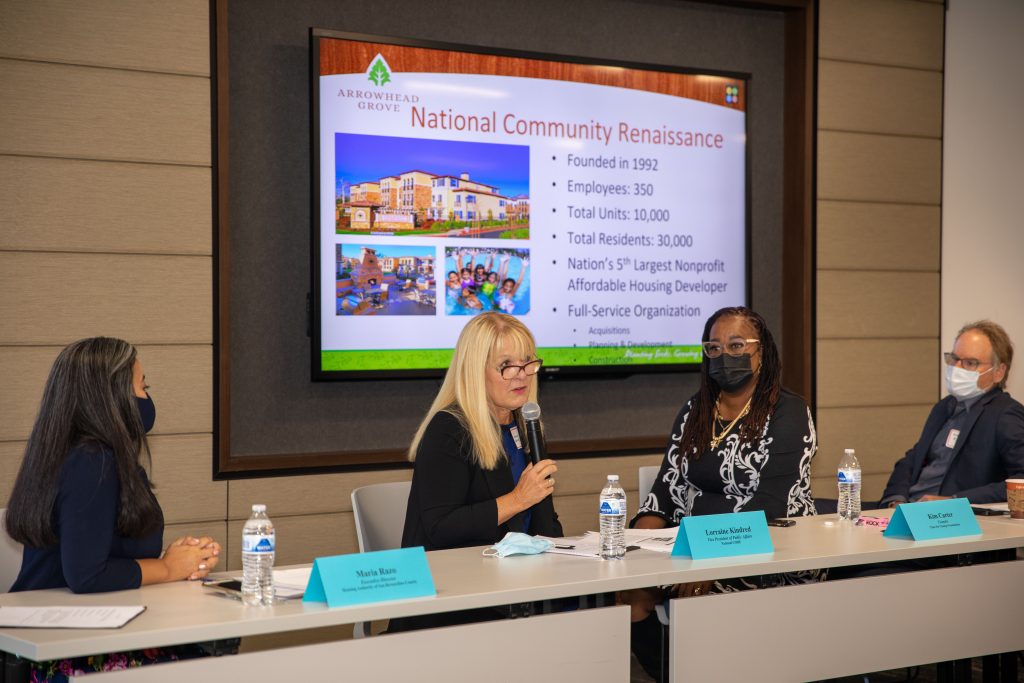 The County of San Bernardino participated in an affordable housing roundtable discussion and tour that was held by California State Assembly members to discuss the housing production and affordability crisis in California.

During the Oct. 12 tour, Assembly Majority Leader Eloise Reyes along with 19 state Assembly members visited the County’s Arrowhead Grove community and the Pacific Village Campus, both in the City of San Bernardino, and Bloomington Grove Affordable Housing development along with the Bloomington Branch library.

“Partnerships are so important in financing, planning and constructing affordable housing,” said Gary Hallen, director of the County’s Community Development and Housing Department. “Without partnerships, the counties can’t do it alone, the cities can’t do it alone. You need to work with your local government, state government, and finance and development teams to be able to find creative solutions to build more affordable housing.”

Reyes said she brought her colleagues to the Inland Empire to see some of the solutions that the County has developed to provide affordable housing to our residents. 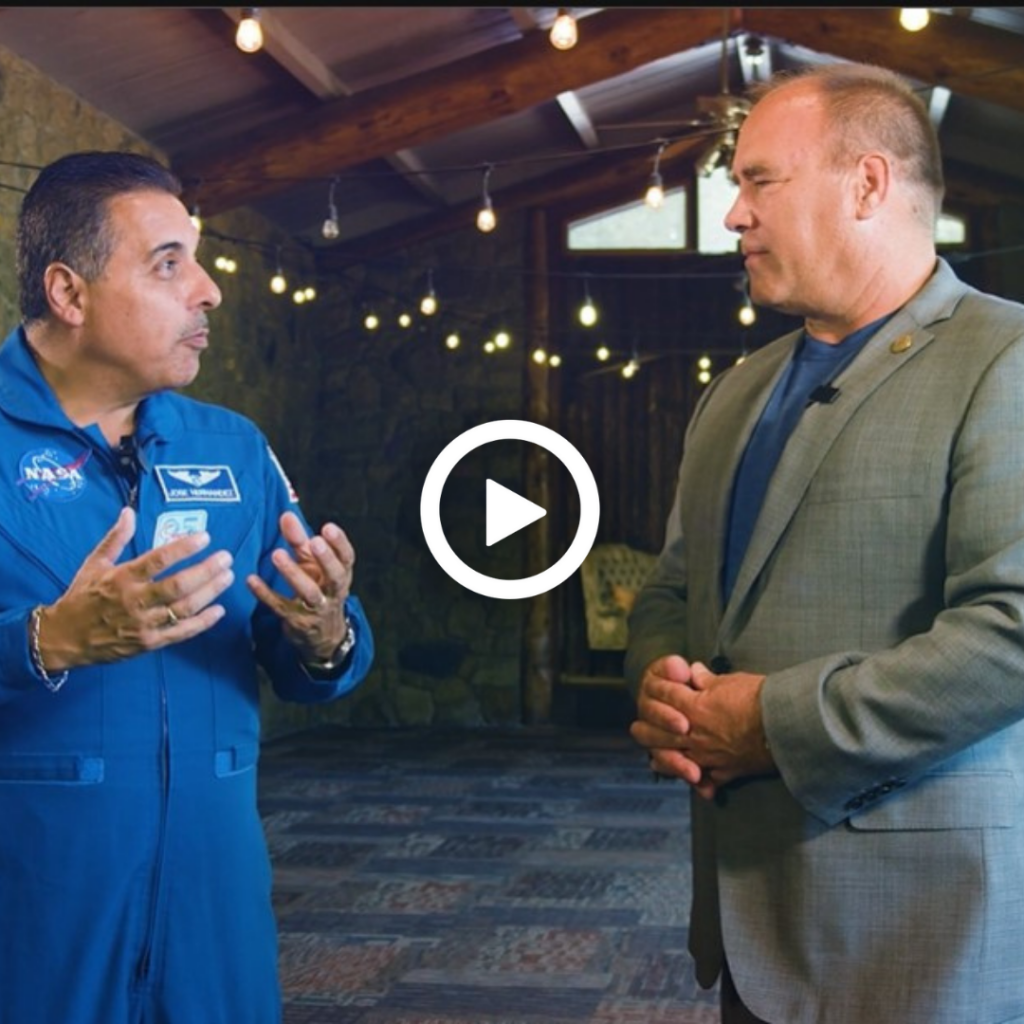 When he was a child, former NASA Astronaut Jose Hernandez spent time in San Bernardino County with his family working as migrant farmworkers in the fields of Chino and Ontario.

With a movie based on his life in the works, Astronaut Hernandez recently returned to San Bernardino County to inspire county residents to focus on their dreams and vision by sharing his story. Children who work in the fields when they’re not in school can dream about becoming astronauts, but only those with families who support those dreams with love and encouragement and by providing a good example can achieve such a dream.

Board of Supervisors Chairman Curt Hagman had the opportunity to interview Astronaut Hernandez during his return to the county. We hope you find his story to be inspirational.

Construction of the Curtain of Courage Memorial is Underway 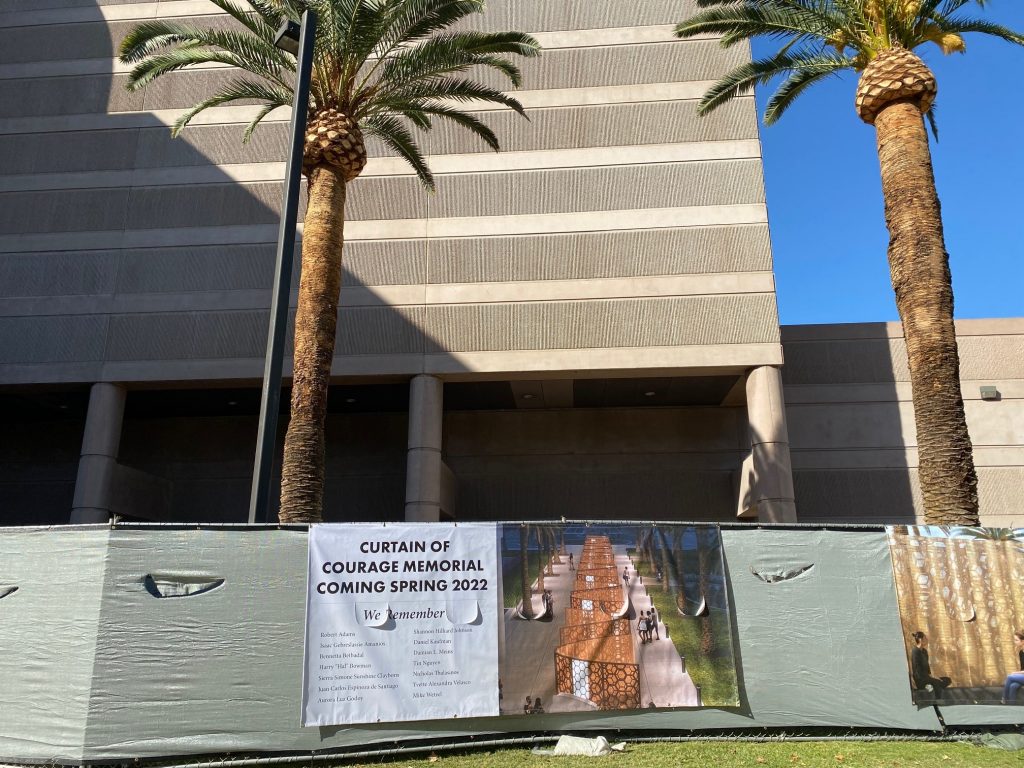 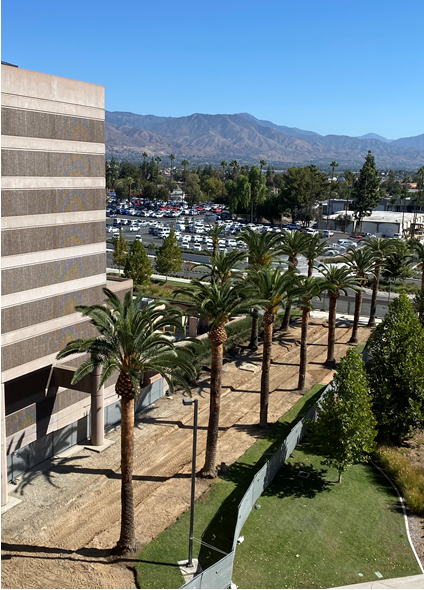 The Curtain of Courage Memorial is now under construction on the east side of the County Government Center at 385 North Arrowhead Avenue in downtown San Bernardino.

The Memorial is a tribute to the 14 people taken from us on December 2, 2015, in the terrorist attack at the Inland Regional Center on Waterman Avenue, the survivors, and first responders who protected our community on that day.

The Curtain of Courage is expected to be completed in the spring of 2022. A private ceremony for the families and survivors will be held when the Memorial is completed followed by a public unveiling.

MET personnel had received numerous complaints about large outdoor and indoor marijuana cultivations in these areas. Over this past week, Sheriff’s personnel arrested 15 suspects. Investigators seized 20,031 marijuana plants, 3,596 pounds of processed marijuana, three guns, eight grams of concentrated marijuana, and 8.9 grams of methamphetamine. There were 159 greenhouses eradicated at all of these locations. Investigators mitigated one THC extraction lab and three electrical bypasses.

The investigations revealed the cannabis cultivations were not in compliance with California’s Medical and Adult-Use Cannabis Regulation and Safety Act (MAUCRSA) and the County’s ordinance prohibiting Commercial Cannabis Activity.

Anyone with information regarding this investigation is urged to contact the Sheriff’s Gangs/Narcotics Division at (909)387-8400 or NARC-MET@sbcsd.org. Callers wishing to remain anonymous may call the We-tip Hotline at 1-800-78-CRIME (27463), or you may leave the information on the We-Tip website at www.wetip.com. 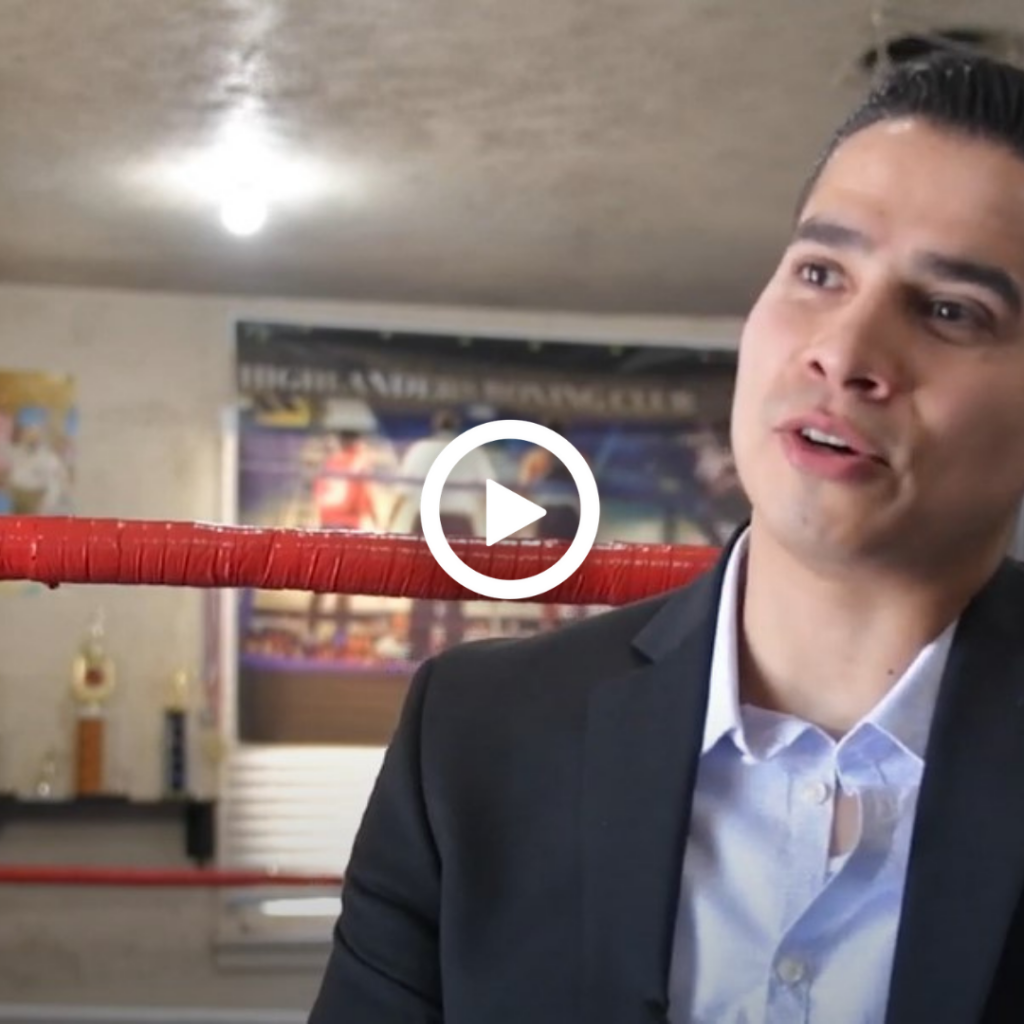 Tony Collins Cifuentes has dedicated his life to the long haul.

The former probationer grew up in South Central Los Angeles and moved to Highland, where he became involved in street violence at a young age.

Boxing helped him turn his life around and Tony subsequently founded the Highlanders Boxing Club to give back to the community.

Through the County Probation Department, Tony found people who cared about him and others who mentored him. He formed a partnership with the department, and Highlanders Boxing Club is now a place where probation youth are referred to so they can have what Tony didn’t – structure and a sense of family.

“The Probation Department’s mission focuses on helping people through assessment, treatment, rehabilitative services, and enforcement,” Chief Probation Officer Tracy Reece said. “We are committed to partnering with quality programs like the Highlanders Boxing Club to help strengthen our community.” 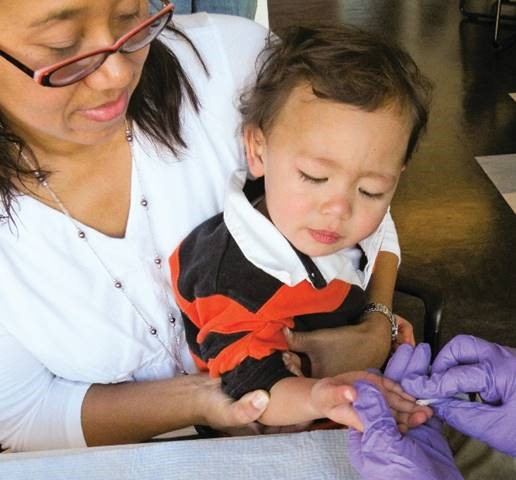 The Department of Public Health commemorates Childhood Lead Poisoning Prevention Week, October 24 – 30, with a week-long information campaign about childhood lead poisoning issues.  Our campaign message this year is, “Even small amounts of lead can harm a child’s health. Ask your child’s doctor about a blood lead test.”  The week-long campaign will educate families and community members about ways to prevent lead poisoning and the importance of testing children for lead.

The campaign will include the display of street banners in the cities of Colton, Fontana and Ontario, mailing out information and materials to local agencies and businesses and social media posts.  Public Health will also partner with cities including Fontana, Redlands and Upland to proclaim October as National Lead Poisoning Prevention Week. 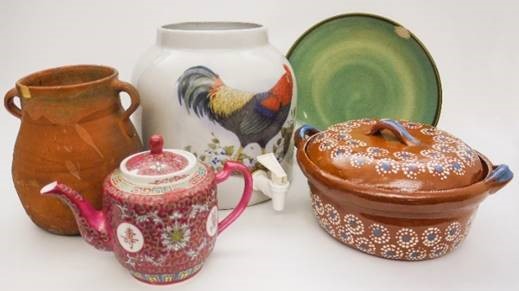 “The purpose of this campaign is to remind parents that lead poisoning can be detrimental to young children’s health and development.  It’s important for parents to ask their child’s doctor about blood lead testing,” stated County Health Officer Dr. Michael A. Sequeira.

Lead poisoning can seriously affect a child’s brain and nervous system.  It can cause learning and behavioral problems. A blood lead test is the only way to identify and confirm lead poisoning in children.

All parents and caregivers of young children are invited to call 909-383-3022 or visit www.cdph.ca.gov/programs/clppb for more information on program services or ways to protect their children from this silent and serious environmental disease. 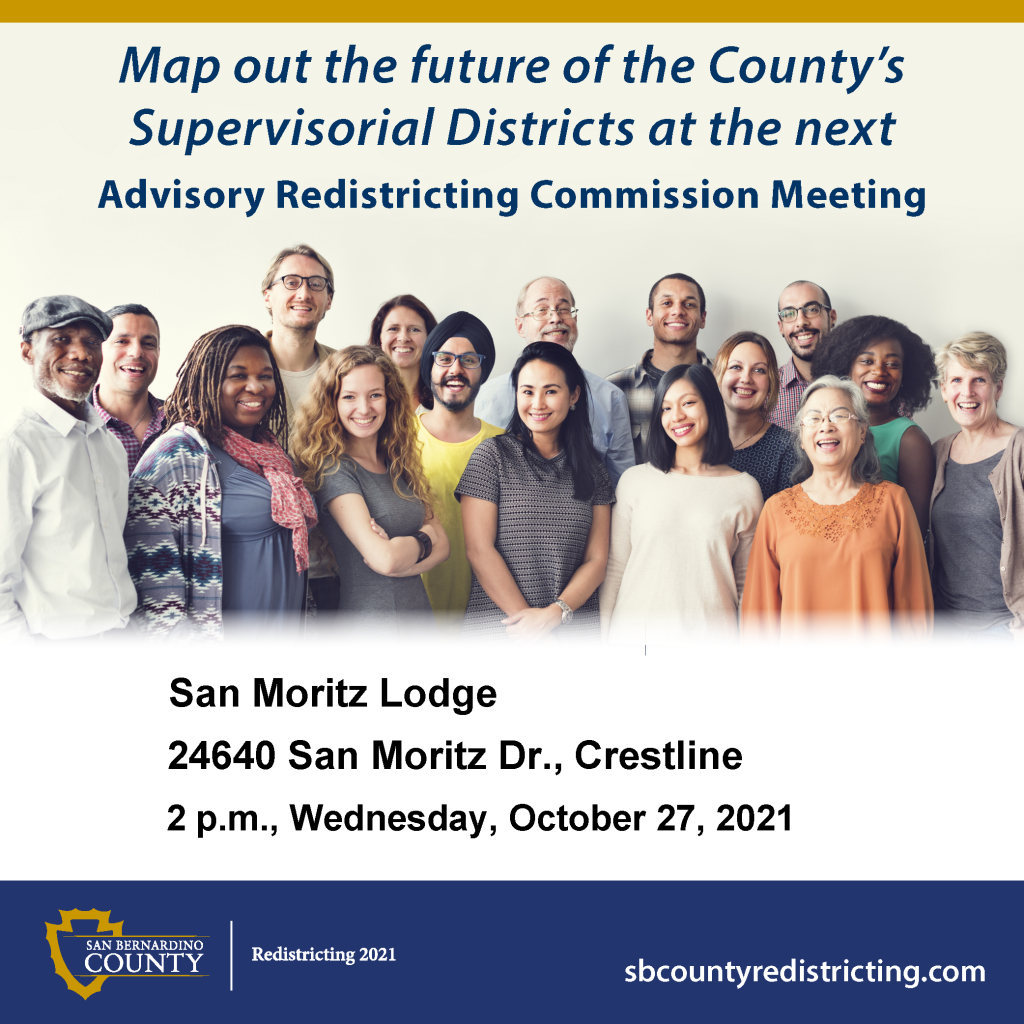 The San Moritz Lodge in Crestline is the next meeting site for the Advisory Redistricting Commission, where the public can continue to help map out the future of San Bernardino County’s five Board of Supervisors districts.

Residents can create their own map proposals using the County’s Maptitude online map-making tool. The tool, along with everything else residents need to know about the Board of Supervisors redistricting, can be found on the County’s redistricting website.

The Oct. 27 meeting will begin at 2 p.m. at 24640 San Moritz Drive in Crestline and will be livestreamed from the County’s redistricting website sbcountyredistricting.com.

Every 10 years, the County uses the newest U.S. Census data to redraw the boundaries of each of the five Board of Supervisors districts to ensure each has essentially the same number of residents, preserves communities of interest such as cities as much as possible, and complies with the Voting Rights Act. The County’s redistricting website offers a wealth of information on the process and schedule as well as contact information and a tool that allows anyone to create and submit their own map of the county’s new supervisorial districts.

Sign up for email updates on county redistricting and receive notices about upcoming meetings and other opportunities to participate. 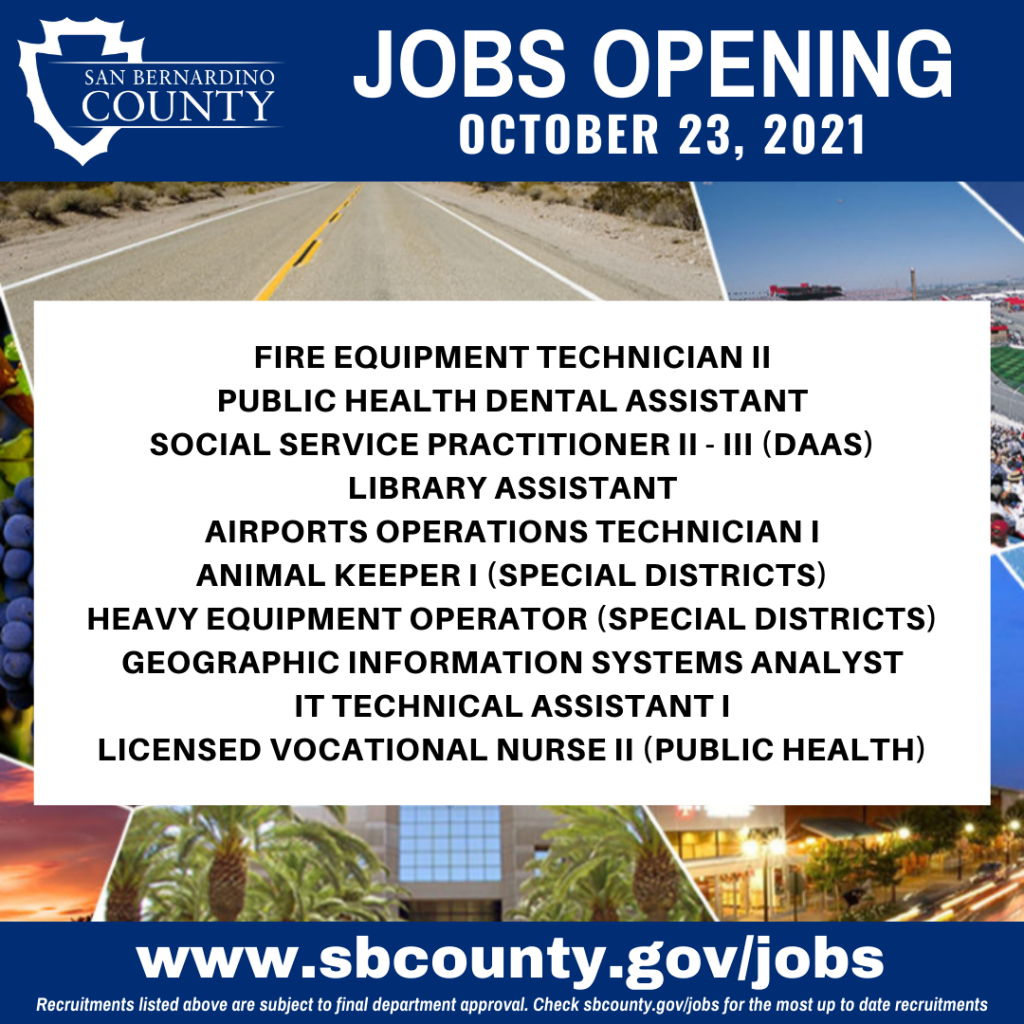 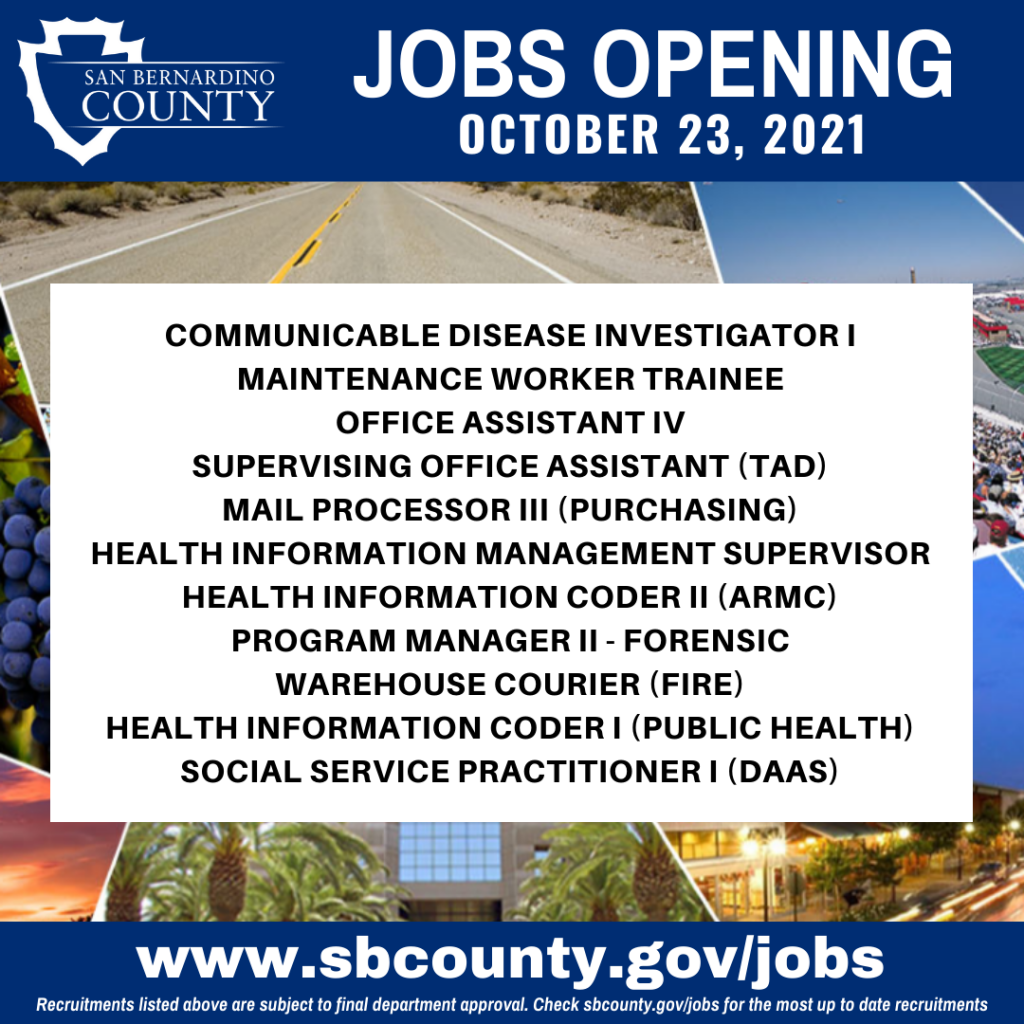 San Bernardino County has jobs that will be opening on Saturday, Oct. 23. We encourage you to apply and share these job openings with those who may be interested in them. Recruitments listed above are subject to final department approval. Check sbcounty.gov/jobs for the most up- to -date recruitments.

The County’s Workforce Development Department is having a hiring events on Oct. 26 from 9 a.m. to noon at West Valley Job Center of California, 9650 9th Street Suite A in Rancho Cucamonga. 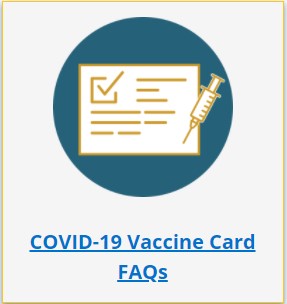 COVID-19 Vaccine Cards are a convenient way to show proof that you have been vaccinated. Read our FAQs at sbcovid19.com/vaccinecards and watch this video to learn more about vaccine cards and what to do if you need to replace yours.

For all COVID-19 related information, including case statistics, FAQs, guidelines, and resources, visit the County’s COVID-19 webpage at http://sbcovid19.com/. Residents of San Bernardino County may also call the COVID-19 helpline at (909) 387-3911 for general information and resources about the virus. The phone line is NOT for medical calls and is available Monday through Friday, from 9 a.m. to 5 p.m. If you have questions about social services, please call 211. 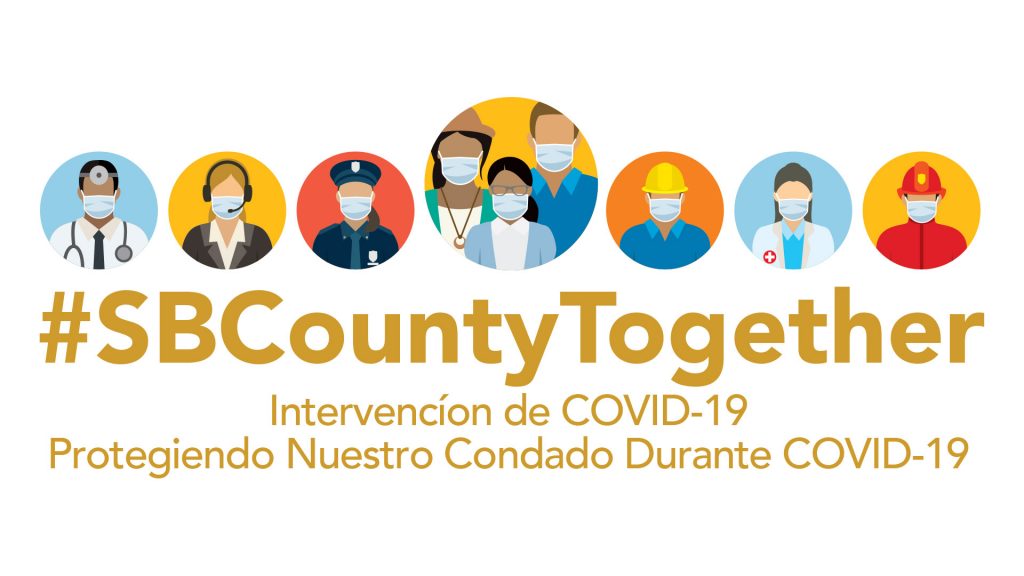 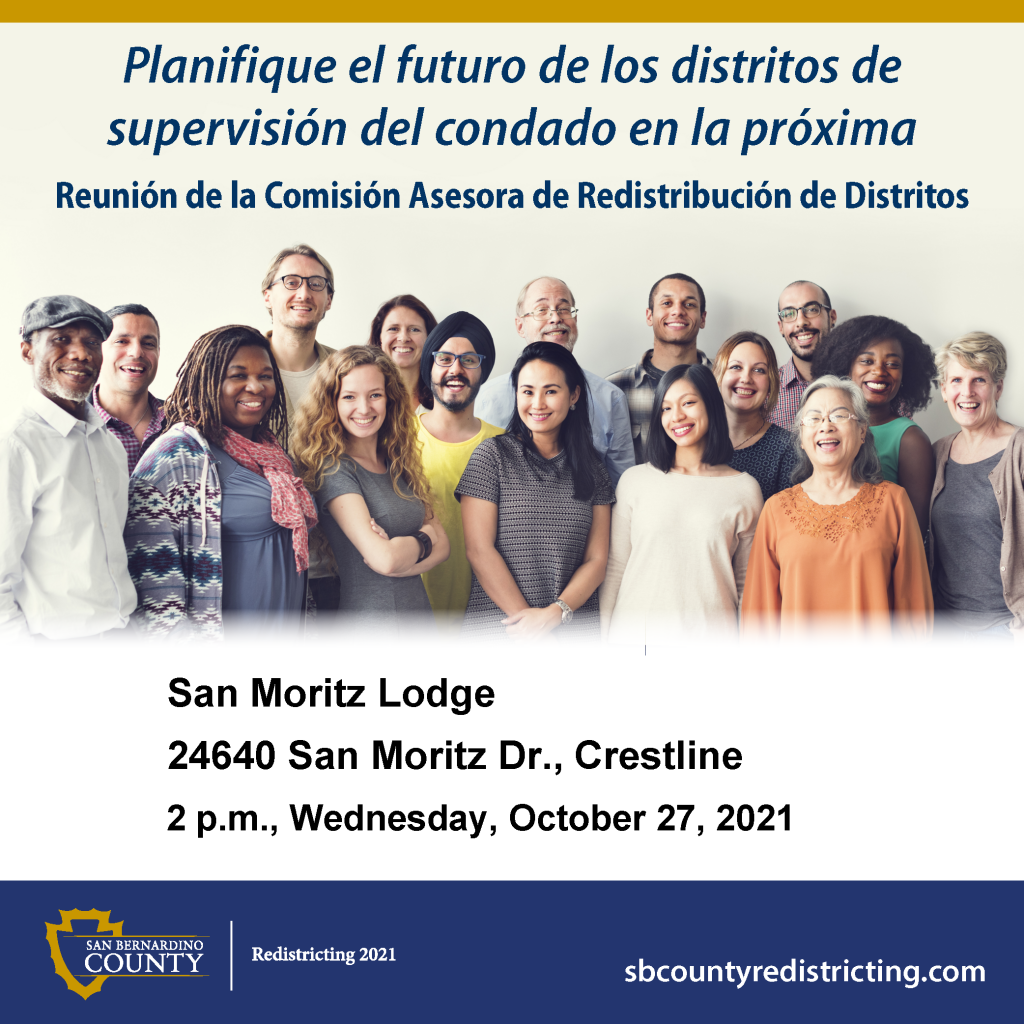