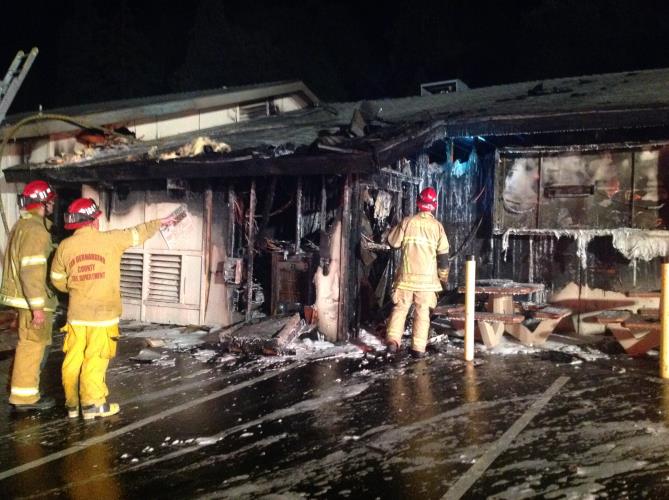 At 1:49 a.m. Wednesday, dispatch received a call from a citizen who said they could see smoke on the north side of Lake Arrowhead near the area of Highway 173 and Yosemite Road.
Units were checking the area when a second report came in from an alarm company that a burglar/fire alarm was activated at the Jensen’s Minute Shoppe (aka Jensen’s Market).
Additional units were dispatched and arrived at the historical landmark within minutes and using the water cannon/monitor from on top of the fire engine, attacked the building, quickly extinguishing the exterior of the rapidly growing fire with 1,500 gallons of water per minute.
The 2nd alarm blaze had spread into the attic space, causing the roof to bow and portions of the ceiling to collapse.  Firefighters made forced entry and pulled portions of the ceiling down, exposing the attic space and preventing additional fire spread.
It took firefighters approximately 40 minutes to bring the fire under control; keeping the fire contained to one side of the building.  Firefighters were instrumental in saving two adjacent businesses, with little to no damage sustained.
In all, five County Fire engines and one heavy rescue unit, along with one CalFire engine, for a total of 22 firefighters, responded to the incident.  Local mountain fire stations were backfilled with County Fire engines from the Valley.
A San Bernardino County Fire Investigator determined the fire started in the attached utility room to the west side of the business.  The fire remains under investigation, however has been ruled accidental in nature.
Preliminary structural damage is estimated at over $250,000, with interior and content damage at over $100,000.  No injuries were sustained.  At the time of the fire, a portion of Lake Arrowhead was without power. It is unknown at this time if the power outage had any correlation with the cause of the fire.
Jensen’s has been a Lake Arrowhead community icon since 1981 and is well known for its deli services.
San Bernardino County Fire reminds you that it is never safe to enter a structure where there is a suspected or confirmed fire. The best action is to safely evacuate and then call 911 from a location outside of the burning structure. No belongings are worth losing one’s life.