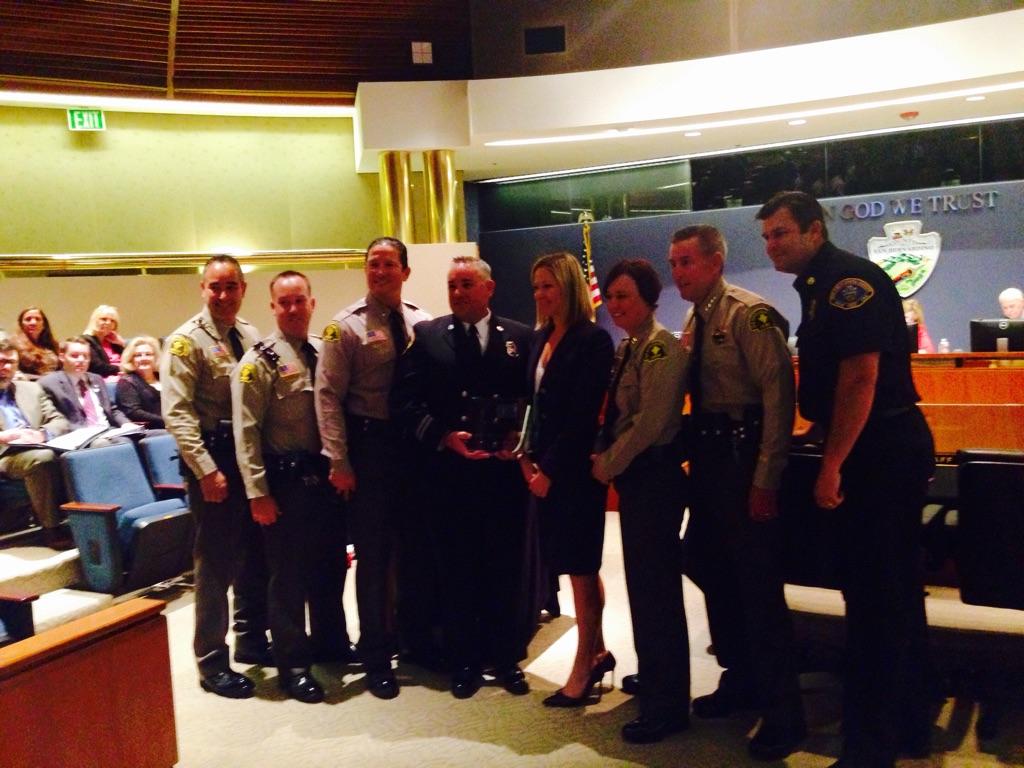 Members of the County Sheriff and Fire departments accept their award from CSAC.

Teaching homeowners to prevent fires around their homes, training inmates to fight wildfires and working to end human trafficking are three innovative County programs honored today by the California State Association of Counties.

The CSAC Challenge Awards are part of a highly competitive recognition program that honors the best and most innovative among California’s 58 counties.

The following are descriptions of each CSAC Challenge Award:

The creation of the Demonstration Property Program teaches residents how to create defensible space around their homes to survive a wildfire. Since the inception of this program, Land Use has seen a 20 percent decrease in non-compliant properties across the mountains and a 20 percent decrease in public inquiries from the mountain communities. Land Use met more than 5,000 residents since the beginning of the program and the amount of fuels reduction is in the thousands of tons.

The San Bernardino County Sheriff and Fire departments work together to identify and train inmates to assist the County Fire Department in fighting wildfires.  The project started with one crew of 15 inmates and has now grown to three crews of 45 inmates. The crew is expected to grow to six crews and a total of 90 inmates by the end of 2015. The crews are available to respond to all types of emergencies, including wildfires, floods, search and rescue, and earthquakes.  The crews are also busy with conservation and community service work projects, including brush abatement and wood chipping.Each inmate must pass a four-week training course that consists of classroom work.  Inmates must also complete rigorous physical fitness training. Job placement for graduates in the landscaping and construction industries is also helping to reduce recidivism.

The District Attorney’s Office created a Human Trafficking Vertical Prosecution Unit comprised of one Deputy District Attorney, one investigator, and a victim advocate. There was also a formation of a countywide Human Trafficking Joint Investigative Task Force with the Sheriff’s Department that consists of a senior District Attorney investigator and a Sheriff’s Deputy. The office also implemented the “Stop-the-John” Project in which the District Attorney’s Office releases and posts online the names and photographs of defendants convicted of solicitation. Outreach was made with community members using the 45-minute documentary Teenage $ex 4 $ale: Human Trafficking in San Bernardino County. The documentary was nominated for an Emmy by the National Academy of Television Arts & Sciences. This campaign has led to increased prosecutions of those who exploit young children and increased awareness throughout the County.

The CSAC awards are just one example of the many honors the County’s excellent programs received this year. In June, the County surpassed its own record, winning 31 Achievement Awards from the National Association of Counties for its groundbreaking programs and services.