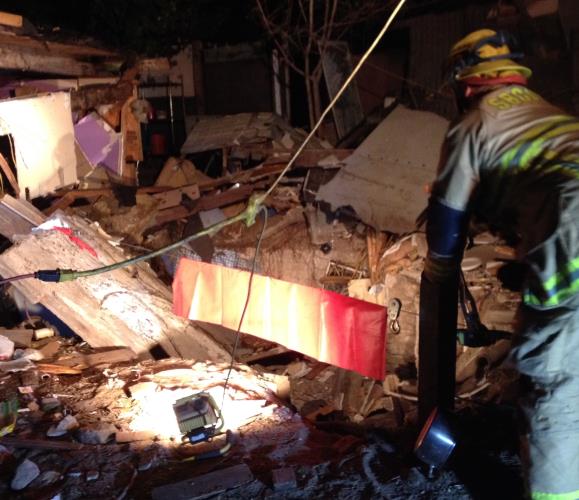 Firefighters responded to numerous reports of an ‘explosion in the area’ of Gray St. in Muscoy about 6 p.m. on Wednesday. Additional reports began filtering in that a house was damaged from an explosion and people were trapped.   Upon arrival, bystanders flagged firefighters down and pointed them toward a home that was partially destroyed by the blast.  The incident was upgraded and other resources were dispatched, including the department’s heavy rescue or USAR team.

On arrival the first due engine company from station 75 in Muscoy found a rear house with severe damage.   One adult male was outside and suffering from severe burn injuries, another adult female was still inside suffering from blunt force trauma and significant head injury.  She was partially covered by debris and was extricated by the rescue team.  Both were transported to Arrowhead Regional Medical Center in Colton with critical injuries. After further checking, another adult male was discovered and found to be deceased and trapped under several tons of debris.  Firefighters would work for the next several hours to remove the debris, consisting of reinforced concrete and other material, and remove the body.

The burn injuries were incurred from the flash fire caused by the explosion. There was no fire to the structure.  The blast was so significant that the freshly paved road in the front of the surrounding homes actually buckled in several places. The home was of poor construction and also had a small basement.  This basement is where most of the damage occurred with the house collapsing into the area.

No other homes had any damage and no evacuations were necessary as the surrounding area was deemed safe.  The county fire department was assisted by the San Bernardino City Fire Department, American Medical Response and the gas company.

County Fire reminds you to make sure your home is clearly marked with address numbers and visible from the street; assisting public safety in finding your location quickly during an emergency.