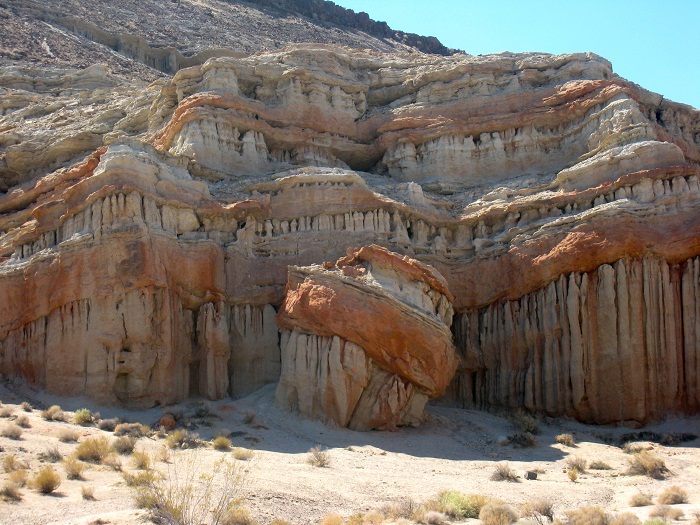 Two hours north of Los Angeles, Red Rock Canyon State Park in Kern County preserves spectacular rocky vistas made up of ancient stream and river deposits, volcanic flows, and ash beds dating to the Miocene Epoch. These colorful panoramas are prominent locales in numerous movies and television shows, but the fossils are Red Rock’s real reason for fame. On Saturday, January 24, 2015, join San Bernardino County Museum Curator of Paleontology Eric Scott as he discusses the ancient animals that dwelled in this part of the Mojave Desert from 7 to 12 million years ago. The 2 p.m. presentation at the Victor Valley Museum in Apple Valley is included with paid museum admission.

The rocks exposed in Red Rock Canyon preserve a rich and varied history of paleontology and geology dating back millions of years. Like San Bernardino County’s own Barstow Fossil Beds, Red Rock Canyon is a treasure trove of Miocene animals. Extinct elephants, rhinos, three-toed horses, giraffe-like camels, saber-toothed cats, and bone-crushing dogs all inhabited this region millions of years ago, and their fossils continue to inform scientists today about their lives. Nor is that the whole story, for Ice Age animals also roamed here near the end of the Pleistocene Epoch, less than 20,000 years ago, and their remains have been discovered as well.

Scott’s lecture will discuss the significance of the fossil record from Red Rock Canyon State Park, including personal recollections of his early years collecting fossils as a young volunteer. The lecture will explore both the Miocene and the Pleistocene fossils from the park, and will compare the animals found therein with other sites throughout southern California.

The Victor Valley Museum is a branch of the San Bernardino County Museum located at 11873 Apple Valley Road in Apple Valley. Museum admission is $5 (adult), $4 (senior and active military), and $2.50 (student and child), under age 5 free. Parking is free. For more information, visit www.sbcountymuseum.org. The museum is accessible to persons with disabilities.