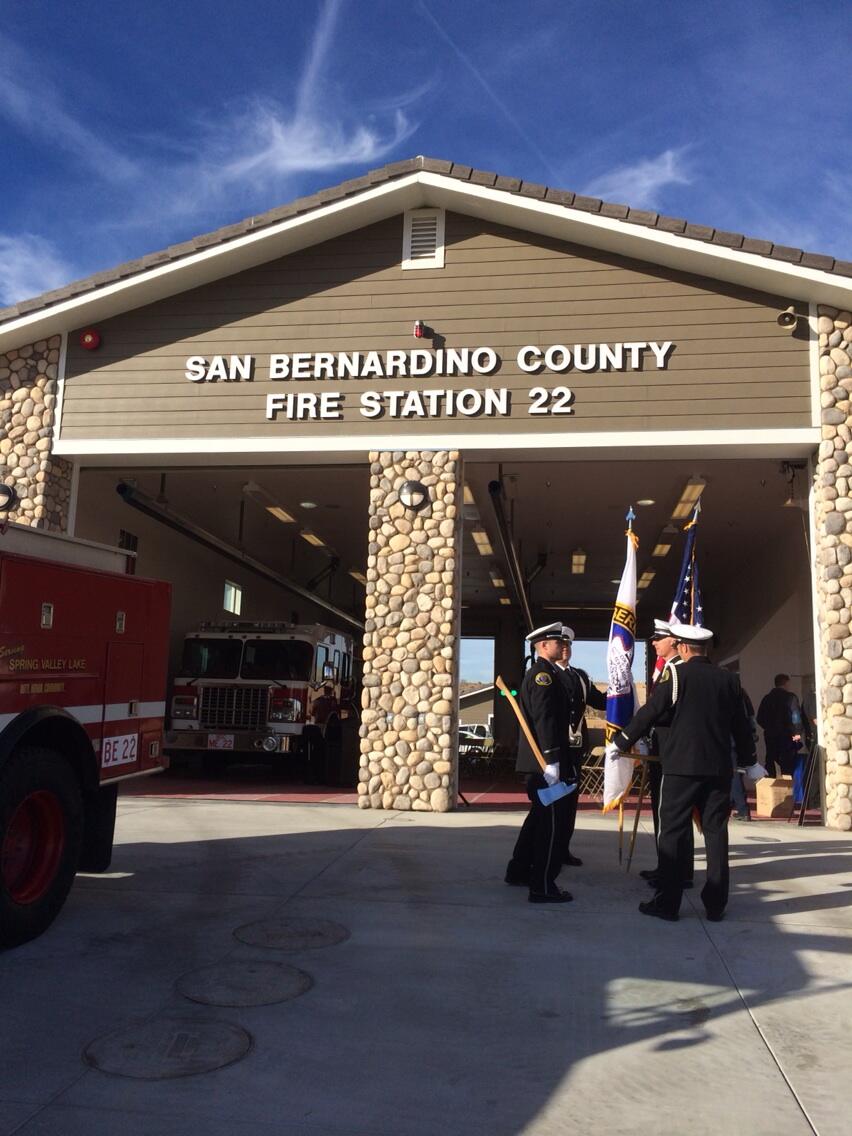 The new facility replaces the temporary fire station that has been serving the community of Spring Valley Lake and surrounding area for the past 21 years out of an aged and substandard single-wide trailer, with its apparatus stored in an adjacent butler building.  The former station was located at the North end of Victor Valley College near the Fish Hatchery.

California Construction out of Riverside started construction on the fire station in November of 2012 and completed the station right on schedule and on budget.  The 6,300 square foot facility includes an apparatus bay for two engines, living quarters, and an approximate 600 square foot equipment storage building.

This state-of-the-art facility was designed to serve the lakeside community of Spring Valley Lake. Station 22 serves over 10,000 Spring Valley Lake residents, and the Victor Valley College, the Sterling Inn & Commons and responds to incidents along the busy Bear Valley Road from the Mojave River West to Industrial Blvd.  On average, Station 22 firefighters respond to over 1,800 calls for service a year, with about 1,300 of those calls being medical responses. Company 22 regularly assists the surrounding cities of Hesperia and Victorville, and the town of Apple Valley when needed. These areas also back up Company 22 as well.

Station 22 houses a brand new Type I fire engine, used for structural firefighting, as well as a Type III fire engine used for wildland firefighting. This station is manned 24 hours a day with a full-time professional Captain and a Firefighter Paramedic.

“When the Board of Supervisors is able to support the building of much needed fire stations, it shows that the economy in our County is rebounding,” stated 1st District County Supervisor Robert Lovingood. “Public safety remains a priority for me and the Board.  A fire station in Angelus Oaks leading into our beautiful mountains was just completed last month.”

Funding for this $3,150,000 project came from the federal Payment in Lieu of Taxes (PILT) program. The PILT program is meant to cover part of the costs associated with providing public services on federal lands that generate no property tax revenue, but the formula has strict caps and Congress rarely provides full funding under the formula. As part of federal legislation in 2008, Congress agreed to fully fund PILT for five years, generating more than $5 million in additional revenue for the County.

“This is a great day for the community of Spring Valley Lake. This is really the community fire station,” stated County Fire Chief Mark Hartwig. “The new fire station will provide better service and protection to the residents of Spring Valley Lake, Victor Valley College and surrounding communities. Its location will shave one to two minutes off response times and be a great service to the schools that are nearby.” Chief Hartwig went on to say, “This is their house and I am proud to serve as their Fire Chief.”

This was the first fire station to use a standardized set of design plans, which will be used on future fire stations for a significant cost savings to taxpayers.