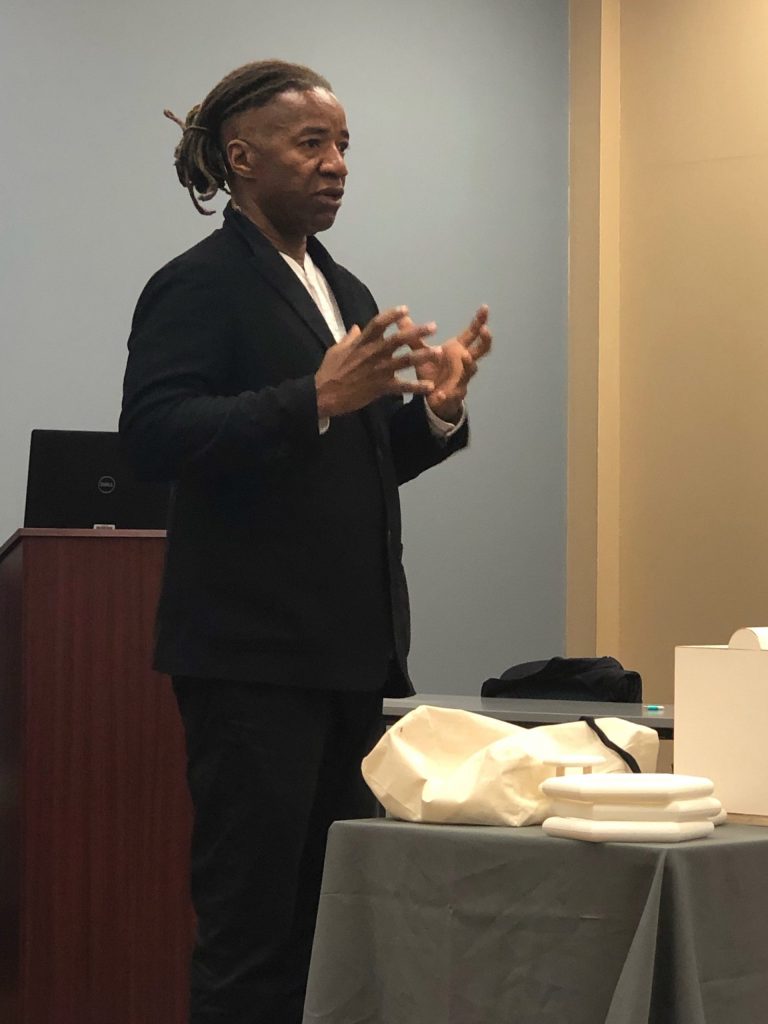 World-renowned landscape architect and artist Walter Hood will design and construct the December 2 Memorial to honor the 14 lives taken from us during the December 2, 2015 terrorist attack in San Bernardino, the survivors of the attack and the heroic actions of our first responders.

“We are honored and excited to have an artist of Mr. Hood’s caliber design this memorial,” said Board of Supervisors Vice Chair Josie Gonzales, who chairs the Memorial Committee. “In his conceptualization and proposal presentation of the project he showed such humble respect for our process, for our families and our employees. The Committee members look forward to walking through the process, to finalize the details of the design.”

Hood presented the “Curtain of Courage” design to the Memorial Committee, which will be a structure comprised of mesh panels made of bronze and steel that are cast with different color glass pieces. The panels simulate the curvature of a curtain and are situated around sitting areas to create a place of healing and reflection by evoking an image of a prism’s eternal sparkle.

“The Board greatly anticipates the completion of the December 2 Memorial in memory of the employees who died and those who survived the horrible attack on our County,” said Board of Supervisors Chairman Curt Hagman. “The Memorial will serve as a place for all of us to join the families of those impacted in remembering, grieving and honoring the courageous acts of our employees and the community on that day.”

Hood is the creative director of Hood Design Studio in Oakland, Calif. and is a professor at the University of California, Berkeley. He received the 2017 Academy of Arts and Letters Architecture Award, the 2019 Knight Public Spaces Fellowship, and the 2019 MacArthur Fellowship. In April 2018, Hood gave a TED Talk on how urban spaces can preserve history and build community.

Over his long career, Hood has designed public arts projects across the country including The Broad Museum Plaza in downtown Los Angeles and Witness Walls in Nashville, Tennessee celebrating the city’s Civil Rights Movement. More of Hood’s work may be viewed here.

In February 2016, then-Board of Supervisors Chairman James Ramos appointed Gonzales to work with County staff on assembling a committee to help build a memorial. The Committee consists of representatives from public safety, the departments of Behavioral Health, Public Health, Real Estate Services, the County Administrative Office and most importantly, representatives from the Environmental Health Services division and family members of our employees who were taken from us on that day.

The Committee reviewed several memorial projects including the Vietnam Veterans Memorial, the Columbine Memorial, the Aurora Theater Shooting Memorial and the 9/11 Memorial. The Committee worked with consultants Elsa Cameron and Michael Lerner of Community Arts International (CAI), a nonprofit San Francisco-based organization that advises on public art projects around the world, to help select an artist.

The Memorial will be located at the County Government Center campus at 385 N. Arrowhead Avenue in San Bernardino. A groundbreaking ceremony will be held at the site on the 5-year anniversary of the attack, December 2, 2020.