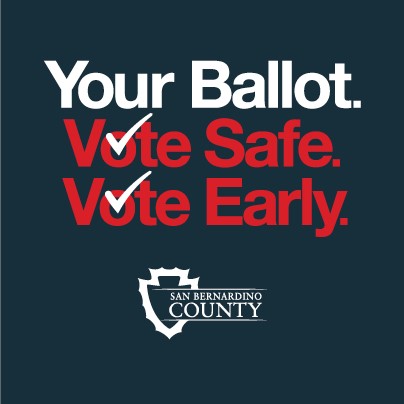 For the 2020 Presidential General Election, there is a greater emphasis on the vote-by-mail option as a result of COVID-19 concerns with public gatherings. For this election, the State decided that each registered voter in the State of California will receive a vote-by-mail ballot.

Voting by mail in California is not new. In fact, approximately 70 percent of San Bernardino County voters requested a mail-in ballot for the March 2020 Presidential Primary Election.

County staff will verify your signature on the mail ballot return envelope matches the signature on file with your voter registration before the ballot is removed from the envelope and counted with other mail ballots with high-speed, accurate scanners. How you vote is private as there is nothing on the ballot itself that identifies it as yours.

If you do not sign the envelope or staff determines the signatures do not match, you will be notified by letter at least eight days before the election is certified and be given until two days before certification to resolve the issue. The Registrar of Voters must certify the results of this election no later than December 1.

If a voted mail ballot is returned after a voter has already voted at the Registrar of Voters office, an early vote site, or a polling place, the mail sorter recognizes and rejects the second ballot. If a voter attempts to vote in person after returning a voted mail ballot, election workers will check in the voter using an electronic roster (or Poll Pad) that will identify that the voter has already voted in the election. If the voter states he or she has not voted in this election, the voter may cast a provisional ballot that is placed in an envelope and County staff will research the voter’s participation in the election before rejecting or accepting the provisional ballot.

If you have additional questions about the upcoming election, please visit www.sbcountyelections.com or read answers to our frequently asked questions. You are also welcome to share our Communications Tool Kit.