San Bernardino County has filed an action directly in the California Supreme Court asking the court to find that the governor’s stay-at-home orders exceed the authority found in the California Emergency Services Act. The county seeks to exercise local control in response to the COVID-19 pandemic rather than be restrained by the state’s regional approach that treats San Bernardino County the same as significantly different counties such as Los Angeles, Santa Barbara and San Diego. 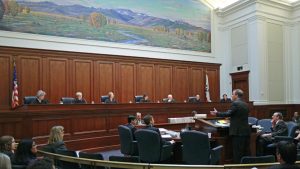 “The governor is not permitted to act as both the executive and legislative branch for nine months under the California Emergency Services Act,” said Board of Supervisors Chairman Curt Hagman. “If it is concluded that the act allows him to do so, the act is unconstitutional as it permits the delegation of the Legislature’s powers to the executive branch in violation of the California Constitution.”

San Bernardino County has worked tirelessly on behalf of county residents and businesses urging the state to recognize that the county’s size and geographic diversity should allow for fewer restrictions in communities with lower COVID-19 metrics than the county as a whole.

“The governor declared that the state’s approach would be based on science and data, but the state has not produced science or data that suggest the restrictions he has imposed would address the current trajectory of the pandemic in San Bernardino County,” said former Supervisor Josie Gonzales, who joined the county in the Supreme Court filing as a private citizen.

The filing states the county seeks to reclaim its constitutional authority “to tailor regulations and orders which are specific to its residents based on facts which are unique to their locations rather than subject its residents to overbroad multi-county, Governor-implemented, regionalized lockdowns.”