It is against the law to feed wild animals. A simple bag of garbage, bowl of pet food, or plate of leftovers can cause severe harm to wildlife. Black bears by nature are fearful of humans, but if people turn them into addicts of human food and garbage, the same bears can become aggressive.

The American black bear is a medium size bear, weighing between 130 and 660 pounds. The black bear can vary in color from black, chocolate brown, cinnamon brown, pale blue (also called Glacier bears) to white (also called Kermode bears). They usually will have a brown muzzle, a light patch of fur on their chest, and curved claws on their feet. 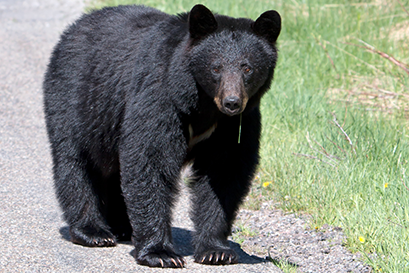