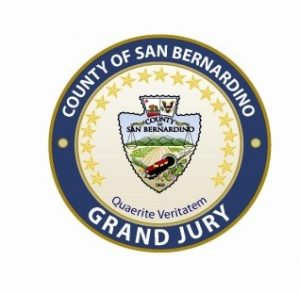 The California Grand Jurors’ Association is a statewide nonprofit organization of former grand jurors with the mission “to promote, preserve and support the grand jury system through training, education and outreach.” The annual Grand Jury Reporting Award recognizes reports of high quality, have had a positive impact on the community, and increased awareness of the California grand jury system.

From January 2014 through December 2016, the Apple Valley Unified School District Police Department (AVUSD-PD) ordered an inordinate number of vehicles towed from public roadways during a 2-year period of time. In most cases the violations were outside of the department’s authority. All were towed by a single tow company. During the same period, there was a decline in student-related interactions and on-campus activity by the police. The investigation led to corrections in policy.

For additional information regarding Grand Jury Reports, please go to the San Bernardino County Grand Jury Website at https://wp.sbcounty.gov/grandjury/ or contact the 2018-2019 Grand Jury Foreperson at (909) 387-9120.