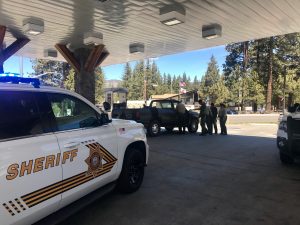 On April 24, 2019, at approximately 11:20 a.m., deputies from the Big Bear Sheriff’s Station responded to a report of a stolen vehicle. The victim reported their 1991 Chevy truck was taken from their residence located in the 1100 block of Anita Avenue in Big Bear City some time during the previous night. A short time later, the vehicle was observed by deputies at the gas pumps of 7-11 in Big Bear Lake. The vehicle was occupied by the driver, later identified as Kimberly Pitcher, and two passengers. Deputies determined that the body of the truck had been spray painted and the doors had been removed.

A felony traffic stop was conducted, and Pitcher was taken into custody without incident. The passengers were detained for questioning and ultimately released at the scene. Pitcher was booked into the Big Bear Jail on a felony charge of grand theft automobile and transported to West Valley Detention Center. She remains in custody in lieu of $50,000 bail. An arraignment hearing in this matter is set for April 26 at San Bernardino County Superior Court.

The vehicle was returned to the victim.