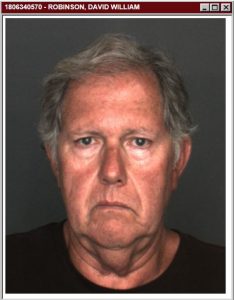 SUMMARY
In May 2018, the victim (now 21 years old) reported to the Chino Hills Police Department he was molested on several occasions when he was 11-12 years old. The victim and the suspect, David Robinson met when the victim was being babysat at a daycare operated at Robinson’s residence in Chino Hills. The in-home business closed in 2016 for an unrelated reason.

On June 5, 2018, Robinson exchanged text messages with a detective posing as a 14-year-old boy. Robinson arranged a meeting at a secluded location. He was arrested when he arrived at the meeting place.

Robinson was arrested for continuous sexual abuse of a minor and meeting a minor to engage in lewd acts. He was booked into the West Valley Detention Center and held in lieu of $350,000 bail. Robinson posted bail on June 6th and was released from custody.

Robinson was involved with the in-home daycare between 1993 and 2016. Investigators are releasing a photograph of Robinson in an attempt to locate any possible additional victims.

Anyone with information is urged to contact the Chino Hills Police Department. Callers wishing to remain anonymous may submit tips online at www.WETIP.com or by phone at 1-800-78-CRIME.