SUSPECT(S): Hector Robles, 35 years of age and Juan Arteaga, 43 years of age, both residents of Fontana

SUMMARY: On Monday, September 25, 2018, at approximately 01:03 a.m., residents near the intersection of San Bernardino Avenue & Beech Avenue called 9-1-1 and reported hearing approximately five gunshots in the area.  Deputies from the Fontana Sheriff’s Station responded and began checking for any victims, bullet casings or impact strikes. Deputies located 27 high calibers, military grade, spent rifle cartridges near the intersection of Cambria Street and Sultana Avenue, in the county area of Fontana.

As deputies processed the scene, they heard an additional ten loud assault rifle rounds in the same area to the east. Deputies carefully searched the area with the assistance of Fontana Police Department, who had also received calls in their area for the gunshots. While deputies searched the area, a maroon convertible sports car fled the location at a high rate of speed. Deputies were able to locate the vehicle parked in front of a home on the 9600 block of Lime Court in the City of Fontana. The convertible vehicle had multiple high caliber military grade spent cartridges on the floorboard in plain view.

Deputies contacted the occupants of the residence and conducted a safety check for any injured victims. Deputies detained all occupants of the home and authored a search warrant for the residence and vehicles. Deputies served the search warrant without incident and located the suspected assault rifle used during the shooting, along with additional evidence related to the investigation. Robles and Artiaga were arrested and transported to West Valley Detention Center, where they were booked without incident. Any victims in the area as a result of the shooting are encouraged to call the Fontana Station Detectives for assistance. 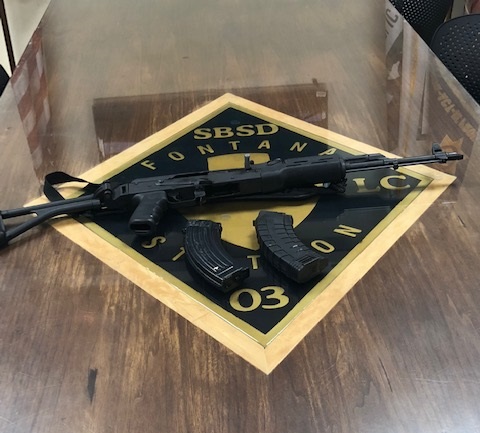