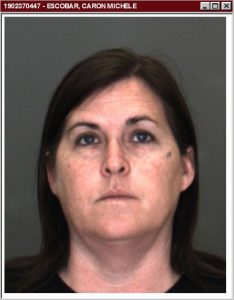 SUMMARY:
On Friday, March 2, 2018, Caron Michele Escobar was arrested for the sexual abuse of two male juveniles. At the time of the incidents, Escobar was employed with the Snowline Joint Unified School District as an Instructional Associate at Chaparral High School in Phelan. Detectives from the Crimes Against Children Detail assisted with the investigation. Shortly after her arrest, Escobar posted bail and was released from custody.

Detectives believe there may be additional witnesses and are releasing Escobar’s booking photograph. Anyone with information is urged to contact the Specialized Investigation Division, Crimes Against Children Detail, Detective MJ Higgins (909) 387-3615. Callers wishing to remain anonymous are urged to call the We-Tip Hotline at 1-800-78-CRIME (27463).