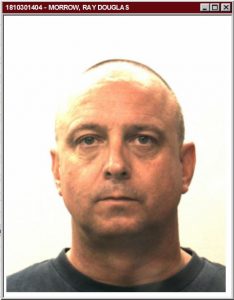 INCIDENT: Providing Harmful Matter to Child and Felon in Possession of Firearm

SUMMARY: On October 26, 2018, Deputy R. Arthurton, from the Morongo Basin Sheriff’s Station responded to a report of lewd acts occurring with a female minor. An investigation revealed the suspect, Raymond Douglas Morrow, had sent nude photographs of his penis to a victim and he asked the victim to have intercourse with him. Further investigation determined Morrow showed another victim child pornography and he attempted to lure her to perform sex acts with him. Deputies and detectives from the Morongo Basin Sheriff’s Station executed a search warrant at the home of Raymond Morrow and recovered multiple items of evidence to include a loaded firearm.

Raymond Morrow was arrested for providing harmful matter to a child and being a felon in possession of a firearm. He was booked into the West Valley Detention Center where he is being held on $100,000.00 bail.

Detectives determined that Morrow was using social media websites to communicate with the female minors. Morrow’s employment took him to several states across the country.