SUMMARY: On Wednesday, June 6, 2018, a resident in the City of Needles reported finding what he believed to be unexploded military ordnance in a garage.

Deputies arrived and visually inspected the ordnance, then contacted the Sheriff’s Arson/Bomb Detail and gave a description of the device.

Detective Phillips with Sheriff’s Arson/Bombs Detail responded to the scene and determined the ordnance was a live World War I French 37mm artillery round. The round was removed for destruction.

Citizens are reminded to be extremely cautious when coming across suspected ordnance/explosives and to notify law enforcement immediately. Additionally, stay clear from the area where the ordnance was found. 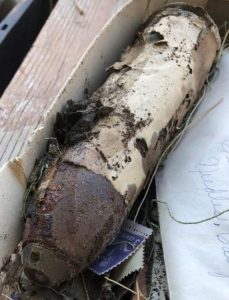