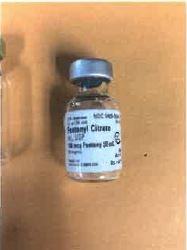 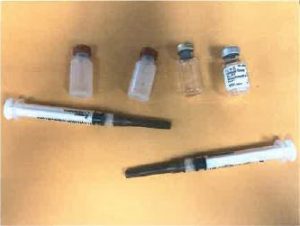 SUMMARY: On September 19, 2018, Deputy A. Acosta and Deputy M. Baltierra, from the Victorville Police Department, contacted Brian Wajs and Katherine Neal, in a homeless encampment near King Ranch Road and Amargosa Road.

While talking to Wajs and Neal, the deputies saw heroin and hypodermic needles lying in the open, among their property. Upon conducting a search of the camp, a vial labeled as “Fentanyl Citrate” was located inside a backpack.

Fentanyl is a very powerful, synthetic opioid, typically prescribed for pain. There has been an alarming surge in the illegal use and manufacturing of Fentanyl over the last couple of years. It is 50 times more potent than most heroin and 50-100 times more potent than morphine. Because of its strong chemical make-up, its effects on the brain and body are rapid and can be extremely dangerous. In fact, in some cases just making skin contact with the drug can cause severe adverse reactions, including death. Anyone that discovers suspected, illegal fentanyl (not prescribed to them by a licensed physician) should avoid contact with the drug and surfaces it has contacted and notify law enforcement immediately.

Anyone with information about this investigation is asked to contact the Victorville Police Department at (760) 241-2911. Callers wishing to remain anonymous are urged to call the We-Tip Hotline at 1-800-78CRIME (27463) or you may leave information on the We-Tip website at www.wetip.com.