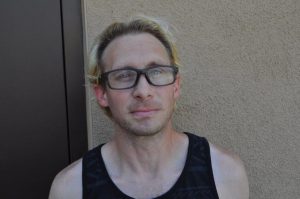 Jason Williams started chatting on social media with who he believed to be a 14 year-old boy. The account is actually an undercover law enforcement account monitored by detectives.

Detectives and Williams chatted and Williams sent nude pictures of himself to the decoy, made arrangements to pick up the decoy and to take him to a location in Yucaipa where he could perform various sexual acts with the decoy.

Williams drove to the agreed upon meeting location where detectives were waiting. Detectives located a makeshift bed, as well as knives, and an ice pick type weapon in his vehicle, near the makeshift bed. Williams was arrested and booked into the West Valley Detention Center and is being held in lieu of $50,000 bail.

Detectives believe Williams has previously met with and engaged in sexual acts with other teenage boys and are releasing his photo and a photo of his vehicle. If anyone recognizes Williams or his vehicle, and has information pertinent to this investigation, they are urged to contact the Yucaipa Police Department, Detective Bureau.

Anyone with information about this case is urged to contact the detectives at the Yucaipa Police Department. If you choose to remain anonymous, call We-Tip at 1-800-78-CRIME.

Course teaches current DUI and Standardized Field Sobriety Tests (SFST) materials and curriculum established by the National Highway Traffic Safety Administration (NHTSA) and the IACP. Course meets prerequisites for ARIDE and DRE set by the California Highway Patrol (CHP). Designed for sworn law enforcement who have responsibilities for DUI enforcement both in the patrol and dedicated traffic enforcement roles. Click for Flyer

This eight-hour course is designed to teach law-enforcement personnel how to properly identify, document, package, and request analysis for items of evidence.   "Click for Flyer"