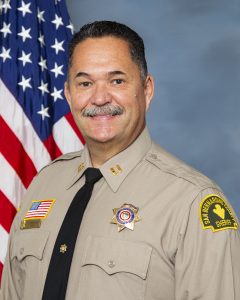 The Male Facility opened in 1960 as a work camp and had a capacity of 100 inmates in a maximum housing unit. The original site was also used as the Sheriff's Basic Academy until many years later when the training center was moved to the property just north of the jail. The current facility has two Minimum Security Housing Units and a Maximum Security Housing Unit. Glen Helen has a maximum capacity of 1446 inmates and averages a daily population of 800 male and female inmates.

Plans are currently in development to remodel two existing dormitory housing units that will house over 500 pre-trial and sentenced county inmates.

Glen Helen's Female Facility originally opened in 1988 with three dorm units for the housing of county sentenced inmates. An additional Maximum Security Unit was added in 2003 and the complex now houses both pre-trial and sentenced females. The Female Facility has the capacity to house 326 inmates and averages an inmate population of 250 inmates per day.

Working in conjunction with the courts and the Judicial Council, San Bernardino County 's Work Release program has been modified to allow more sentenced inmates to qualify for the program. Qualifying in-custody inmates can take specified classes while incarcerated at Glen Helen and, upon completion, may qualify for 'Work Release'. Under the direction of the court, the inmate can be released before his maximum sentence has been completed in order to reestablish ties with their family. In this way, the individual can return to their former employment and serve the community on their non-scheduled workdays.

The San Bernardino County Board of Supervisors authorized the Sheriff to administer a work release program. While providing manual labor to improve or maintain public facilities, inmates may re-establish ties with their family, return to work with their previous employers; while serving the community on their non-scheduled work days. Inmates who qualify may complete their court commitment on the electronic confinement program from Glen Helen. The program requires the program participant to wear a GPS ankle transmitter for the length of their commitment. The program is fee based ($15.00 per day), however the inability to pay does not disqualify an applicant from participation.

The Inmate Services Unit (ISU) is based on the Glen Helen site and administers services for inmates housed in San Bernardino County’s four primary custody facilities and five outlying jails.   Teachers, counselors, chaplains, Sheriff’s staff, and volunteers provide court-ordered and voluntary academic, vocational, and cognitive classes, Twelve-step programs, crisis counseling and religious services to facilitate rehabilitation during incarceration and upon release.  ISU collaborates with other government agencies, schools, community and faith-based organizations, as well as local employers to provide programming with the goal of making our community safer through reduced recidivism.

In May 2013, the San Bernardino County Sheriff’s Department and San Bernardino County Fire Department launched a pilot program to train inmates to work as firefighters. The county opened an 8-acre inmate fire camp which houses male inmate fire hand crews. It is important to note; this was the first county operated fire camp in the state. The program was, in part, a response to California’s prison realignment law that shifted responsibility for detaining low-level convicts from state prisons to county jails in October 2011. Jail populations swelled with the arrival of former state prisoners, including some who had worked on fire crews run by the California Department of Forestry and Fire Protection.  Realignment also led to inmates serving longer sentences in county jails. This meant inmates could complete firefighter training and still have ample time left on their sentences to serve on a fire crew. The fire currently consists of three, 14-man crews and we are hoping to add more. On November 23, 2015, a 13-member female fire crew graduated from the fire camp after completing nearly five months of training. This female fire crew was the first of its kind in the state.