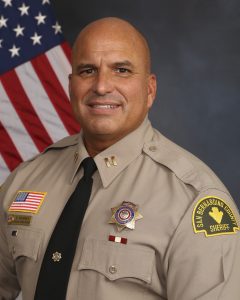 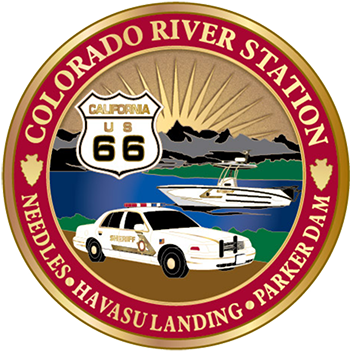 The Colorado River Station covers the second largest geographical jurisdiction in San Bernardino County.  The area extends from the Nevada State line south to the Riverside County line and from the Arizona State line on the Colorado River west to Kelbaker Road. The office is located on "J" Street in Needles and provides police services by contract to the city of Needles. The facility houses a 30 bed type I jail facility, which takes in all arrestees from the Sheriff's Department, the California Highway Patrol and all the other agencies that arrest under state law on the California side of the river.

The station maintains two resident posts at Parker Dam and Havasu Landing, and a Water Safety Center at the County's Park Moabi Regional Park. Station personnel are responsible for law enforcement throughout 5200 square miles of unincorporated area as well as 90 miles of the Colorado River, which sees nearly 17 million visitors a year.

The Marine Enforcement Unit patrols the Colorado River from the Nevada State line to the Riverside County line.  The busiest season begins during Spring Break and ends sometime after Labor Day. Memorial Day, the Fourth of July and Labor Day weekends see a large number of visitors on the water and a maximum number of personnel are staffed during those times.  The focus of their efforts is educating the boating public on safe and sober operation. Through these efforts the number of boating under the influence arrests and fatal accidents has been reduced in recent years.

The vast expanse of desert in the jurisdiction's western portion is home to Mitchell Caverns State Park, the Mojave National Preserve and large expanses of open desert managed by the Bureau of Land Management. Thousands of people visit these, and other desert wonders, each year. Occasionally hikers become lost or injured requiring a response from station’s Search & Rescue unit.

The station maintains a large contingent of volunteers that make up the Citizen Patrol Units, Line Reserves, Explorer Scouts, YANA, and Search & Rescue.  These dedicated individuals donate thousands of hours each year to keep the citizens safe and the station functioning efficiently.

Personnel from the Colorado River Station are proud to provide professional law enforcement services to those who live in and visit the "East Coast" of San Bernardino County.

For information on boating safety please visit the California Division of Boating and Waterways website at http://www.dbw.ca.gov/