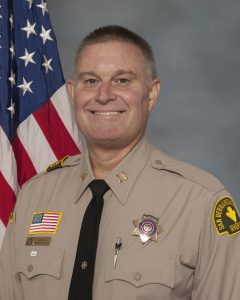 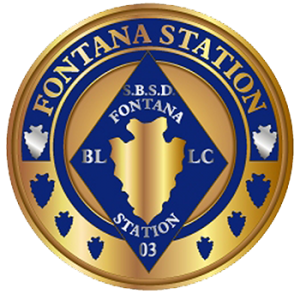 Fontana station was established in 1941 and has carried a sense of loyalty and dedication since the first day. The men and women assigned to Fontana convey a pride like no other found in this Department.

The station is located on the corner of Alder Avenue and Arrow Route in the city of Fontana. The station was remodeled in 2003, which doubled its size. The station is composed of one Secretary, five Professional Staff, two Sheriff’s Service Specialists, 30 Deputy Sheriff’s, four Detectives, six Sergeants, one Lieutenant and one Captain. Two Deputy Sheriffs are dedicated to serving the communities of San Antonio Heights and Mount Baldy.  In 2021, two Deputies were assigned to solely serve the community of Bloomington. Fontana deputies enjoy a close working relationship with the surrounding agencies of Fontana Police, Rialto Police, Upland Police, Rancho Cucamonga Police, Los Angeles Sheriff’s Department, Riverside Sheriff’s Department, and the California Highway Patrol.

The Fontana station serves a population within the 129 square mile patrol area in the unincorporated county areas of Fontana, Bloomington, Rialto, San Antonio Heights, the communities of Rosena Ranch and Lytle Creek. It also interfaces with Los Angeles and Riverside Counties, and includes the unincorporated areas of Upland, and the Mount Baldy wilderness.

Based on the expansive coverage area and services provided by the Station, volunteer units are an essential and pivotal element in accomplishing the Station’s mission. Volunteer units such as the Explorers, Line Reserve Deputies, Citizens on Patrol, West Valley Mounted Posse, and the highly regarded West Valley Search and Rescue Team, provide indispensable services to local and adjoining communities. This allows the Sheriff’s Department to serve the citizens of this area with quicker response times. Along with patrolling the San Antonio Heights area, Citizen Patrol members have constructed a secure garage at no cost to the taxpayer, for the storage of Citizen Patrol and Mountain Search and Rescue vehicles.

The Mount Baldy and Lytle Creek wilderness areas draw adventurers from around the state.  On occasion throughout the year, the West Valley Search and Rescue and West Valley Mounted Posse are called upon to rescue stranded or injured hikers from remote locations.  The Fontana Sheriff's Station continues to conduct criminal offender sweeps and gang suppression operations throughout its patrol area and assists with many more throughout the region. Our deputies, in conjunction with local parole, probation and code enforcement officers, continue to curb criminal activity as part of Problem Oriented Policing. Several additional criminal offender operations will be conducted in the years to come, ensuring area residents a safe environment in which to live and raise their families.

In addition to the essential law enforcement services extended by the men and women of Fontana Station, the station also hosts many comprehensive events. The Auto Club Speedway 400 is the largest public gathering event in the county. Fontana Station is also host to the Hard Summer Music Festival and many other events, which generate in-excess of 500,000 spectators annually.