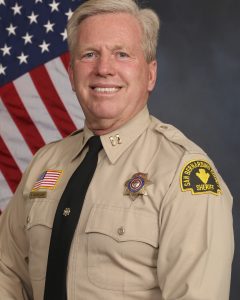 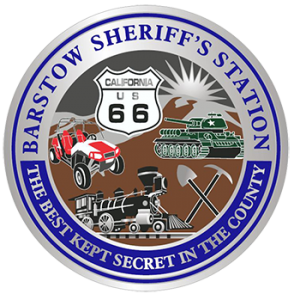 Due to the large expanse the deputies cover, they regularly assist and are assisted by the California Highway Patrol, Barstow Police Department and the Bureau of Land Management Rangers. They also work closely with the Provost Marshal's Office and the Criminal Intelligence Division investigators at Ft. Irwin and the Marine Corps Logistics Base which are both located in Barstow Station jurisdiction.

Anyone interested in the opportunity to be involved in Search and Rescue would certainly enjoy working at the Barstow Sheriff's Station. The Barstow Desert Rescue Squad, based in Barstow, specializes in Mine Rescue. Some of the employees at the Barstow Station volunteer their time to be part of this special group.

Whether it's the investigation of crimes, the search for a missing person, or involvement with the community's youth, the employees of the Barstow Sheriff's Station continue to commit their best effort to the citizens living in this unique jurisdiction.

The Baker Substation is a satellite substation to the Barstow Station. It is located in the town of Baker, approximately 60 miles north of Barstow on Interstate 15. This assignment is what is known as a "resident post." Deputies assigned to Baker live there in county housing and are truly integrated with the community. In fact, it is probably the closest thing to a town sheriff of the old west. The deputies not only provide law enforcement services, they also are an involved component of the community upon which the citizens come to rely.

Baker is also unique in another aspect. Since it is located on Interstate 15 and is frequently used by travelers as a rest stop, the daily population fluctuates dramatically. As one deputy put it, "it is like a city of 5000 people, only the people change every hour."

As you can imagine, this environment can be challenging for the deputies assigned there. As a result, the Baker Deputies work closely with the California Highway Patrol. This is of mutual benefit to both agencies, who are frequently confronted with problems associated with large numbers of the traveling public. Stranded motorists, lost persons  and traffic collisions are just a few of the many issues these officers face on a daily basis.

Tourists that are traveling to popular destinations such as Las Vegas and Death Valley can be sure that dedicated law enforcement officers are patrolling the most remote of locations to provide assistance when called upon to do so.

The Trona Substation is a satellite substation to the Barstow Station. It is located in the town of Trona in the Searles Valley. The corporal and two patrol deputies assigned to this "resident post" handle calls in the many small desert communities in the northwest corner of San Bernardino County. The Deputies are truly part of the community and also represent the county as some of the few county employees assigned full time to serve the residents in this area. Sheriff's Volunteers from the Trona Citizens on Patrol assist the deputies in making this a better spot to live and work. Trona is Community Oriented Policing in action. The deputies are involved in the many community events that occur throughout the year.

The Searles Valley is one of the richest deposits of minerals in the world and home to one of the largest taxpayers in the county (IMC Chemical) that runs three large industrial chemical plants. There is also a power plant and private railroad to serve the valley and plant operations. During the second weekend of each October, the local Searles Lake Gem and Mineral Society hosts a Gem-O-Rama that more than doubles the population of the area. People come from all over the world for this event.

Because of the remote area, the deputies often work with other agencies (including but not limited to the CHP, Ridgecrest PD, Kern SO, Inyo SO, State Fish and Game, BLM, China Lake PD, State Parole, and the Park Service from Death Valley) to successfully handle the many tasks needed to keep the area safe.

Deputies often have contact and assist tourists and visitors from other countries who are in the area. In addition to being on the route from Death Valley (the lowest point in the US) to Mt. Whitney (the highest point in the continental US) the area also is home to the famous Trona Pinnacles.

“Data Entry” is a 16-hour course that will train users to search the database to assist in criminal investigations along with identifying gang members and gang criteria. It will also provide users the ability to enter all data into the system. "Click for Flyer"

This course is designed to train and certify law enforcement officers in the proper and efficient use of LIDAR. The students will be provided with an understanding of the laser as an enforcement tool, along with practical skills, and legal considerations. PREREQUISITE: ** MUST BE RADAR TRAINED TO ATTEND THIS CLASS** Learning Topics • Principles • Practical Applications • Potential Errors • NOTE: Please bring a scientific calculator and USB flash drive Click for Flyer

This course serves to educate the patrol-level law-enforcement officer in the response to fentanyl-related overdose investigations.  Students will learn the fundamentals of fentanyl overdose deaths, how to stay safe when handling fentanyl and proper documentation.  The course will cover investigative techniques and review the pertinent charges related to these investigations.  Finally, case studies will be shown to demonstrate the importance of the initial patrol response through the prosecution while discussing lessons learned. "Click for flyer"

This course serves to educate the patrol-level law-enforcement officer in the response to fentanyl-related overdose investigations.  Students will learn the fundamentals of fentanyl overdose deaths, how to stay safe when handling fentanyl and proper documentation.  The course will cover investigative techniques and review the pertinent charges related to these investigations.  Finally, case studies will be shown to demonstrate the importance of the initial patrol response through the prosecution while discussing lessons learned. "Click for flyer"

Course teaches current DUI and Standardized Field Sobriety Tests (SFST) materials and curriculum established by the National Highway Traffic Safety Administration (NHTSA) and the IACP. Course meets prerequisites for ARIDE and DRE set by the California Highway Patrol (CHP). Designed for sworn law enforcement who have responsibilities for DUI enforcement both in the patrol and dedicated traffic enforcement roles. Click for Flyer