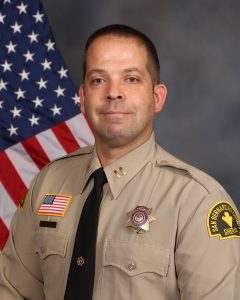 For Information on:
Off-Highway Vehicle
OHV Education and Safety 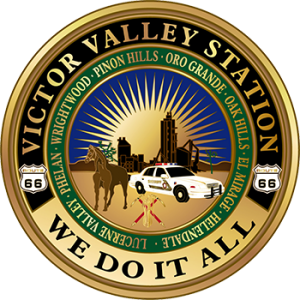 The Victor Valley Station, under the command of Captain Jeremy Martinez, is located at 11613 Bartlett St. in the City of Adelanto. This station provides contract law enforcement services to the city of Adelanto and has two substations- one in Lucerne Valley and the other in Phelan.

The Victor Valley Station provides law enforcement services to the communities of Adelanto, Helendale, Oro Grande, Silver Lakes, El Mirage, Spring Valley Lake, Oak Hills, Wrightwood and the unincorporated areas of the Victor Valley area not serviced by the cities of Hesperia, Victorville and the Town of Apple Valley.

These patrol areas cover a wide range of mountainous and remote desert terrain, with heavy to sparsely populated rural and urban regions that also contain commercial and industrial areas with a population over 56,000 in the unincorporated areas and over 35,000 in the City of Adelanto.

A 40 hour per week deputy sheriff is allocated to serve the Helendale CSD and the planned community of Spring Valley Lake.

The grant funding from the State of California’s Department of Parks and Recreation has enhanced our Off-Highway Enforcement (OHV) Program. We have been extremely successful in our encounters with illegal shooters and OHV riders and drivers, issuing citations when needed and educating the public about proper areas to ride in as well as shoot in. We have been extremely successful in recovering stolen vehicles, locating lost or missing OHV riders and drivers and augmenting other search and rescue operations as well as assisting BLM (Bureau of Land Management) during major off highway events. The equipment is also used as a public relations tool at parades, safety fairs, school gatherings other OHV programs and regular law enforcement patrol operations.

The Victor Valley command has ten volunteer units. These include two search and rescue teams, two mounted posse units, one line reserve unit, and five Citizens on Patrol units. These units have a combined membership of over 200 persons, who consistently donate in excess of 50,000 hours annually of their time serving the Sheriff’s Department and the citizens of San Bernardino County.

The Lucerne Valley Substation has one sergeant, one detective and seven deputies who are responsible for 900-plus miles of farming, ranching, commercial businesses and residential areas located within a wide range of mountainous and remote desert terrain. The overall population is approximately 5,900 residents, which includes the unincorporated areas of east Apple Valley.

The Phelan Substation has one sergeant, one detective, and ten deputies who are responsible for law enforcement services in Phelan, Pinon Hills, Wrightwood, West Cajon Valley, as well as portions of Oak Hills and El Mirage.

These patrol areas also cover a wide range of mountainous and remote desert terrain. These areas have heavy to sparsely populated rural and urban regions with commercial and industrial areas. The overall population is approximately 35,000 residents.

The Phelan Substation’s Wrightwood Search and Rescue team is one of the County’s premier S&R teams. Members of this team are highly skilled at rescuing persons from treacherous mountain terrains and altitudes requiring the use of specialized mountain climbing skills and equipment that require the use of pitons, ropes, pulleys and airborne helicopter operations.

This course will teach basic medical care interventions, which can save an injured officer or victims’ life until they can be assisted by conventional EMS.  Instruction will focus on the use of readily available resources such as tourniquets, gauze, wound packing materials, hemostatic dressings, etc. "CLICK FOR FLYER"

This course provides training and skills to assist the patrol officer with the identification and investigation of persons under the influence of drugs and current drug trends. "Click for Flyer"