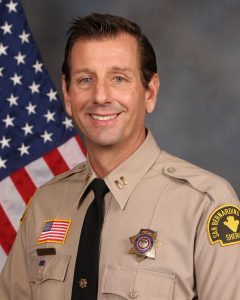 The mission of the Scientific Investigations Division is to provide our law and justice clients with forensic science services that are timely, relevant and cost-effective.

The Scientific Investigations Division (SID) provides laboratory services to all law enforcement agencies in the county of San Bernardino. SID is a full-service crime lab consisting of five sections and over 100 staff members. Since 1995, the Scientific Investigations Divisions has been an accredited laboratory through the American Society of Crime Laboratory Directors/Laboratory Accreditation Board (ASCLD/LAB) and ANSI National Accreditation Board (ANAB).

Job Opportunities at SID and the Sheriff's Department can be found at the San Bernardino County Human Resources Department employment section.

Prior to 1957, law enforcement agencies in San Bernardino County relied on private examiners or the services of the Los Angeles Police or Sheriff’s Labs for forensic services. To improve the availability of these services, Sheriff Frank Bland initiated the creation of a local crime laboratory in 1957. The Department hired Tony Longhetti, a California native and a graduate of the University of California-Berkeley Criminalistics program, to staff this new one-man operation. In August 1957, the new lab received its first case involving the analysis of arson evidence. This was followed shortly thereafter by the submission of possible “marijuana.” In 1982 the Crime Lab and the Identification Section combined to create the Scientific Investigations Bureau. Over the years, the division staff slowly increased to over 100 employees conducting analysis in multiple forensic disciplines analyzing thousands of cases each month.

From 1957 through 1983, the crime laboratory was located in various locations in the county courthouse. In 1983, the crime lab moved to its current location, occupying a former county flood control laboratory built in the 1960’s. In 1988, a significant expansion was completed at the current site providing a large property warehouse and additional space for the identification and laboratory functions. With demand for services increasing, and space for additional personnel limited in the current facility, the Cal-ID (Fingerprint Identification) section of the Division was relocated to leased space approximately ½ mile from the main laboratory facility in 2003.

On April 22, 2016, a dedication ceremony was held for the crime lab annex. The crime lab annex provides state of the art space for the controlled substances, forensic alcohol, firearms and toolmarks, and the Crime Scene Investigation Units.

The Forensic Biology Unit examines evidence for biological fluids and then analyzes biological samples from crime scene evidence and reference samples from known individuals.  The crime scene and known sample DNA profiles are compared to determine possible sources of the DNA. Crime scene sample profiles may be searched through the FBI’s Combined DNA Index System (CODIS) database for investigative leads.  Criminalists issue scientific reports on their findings which may provide statistics to assist in the interpretation of the results and testify in court, as necessary.Sources of DNA are biological fluids like blood, semen, saliva and touch DNA.  Evidence analyzed includes bloodstains, sexual assault kits, underwear/clothing, weapons, hair roots, cigarette butts, steering wheel swabs, airbags, fingernails, etc.  Our case work is divided into three types:  Major crimes, Sexual Assault crimes and Property crimes.
Forensic Alcohol Unit is responsible for detecting, quantifying and interpreting blood and breath samples for alcohol. The blood alcohol section provides accurate and reliable alcohol analysis to determine the concentration of alcohol in blood samples for DUI cases. Additionally, the breath alcohol program calibrates, maintains and trains all operators on all Evidential Breath Alcohol Testing (EBT) instruments used within San Bernardino County. The team provides scientifically sound expert testimony on the interpretation of alcohol levels and the resulting impairment as it relates to safely operating a motor vehicle.

The Controlled Substances Unit is responsible for analyzing unknown powders, pills, plant materials and liquids to determine if they contain a controlled substance, as defined by Federal and California laws. The unit uses a variety of techniques ranging from basic wet chemistry, such as thin layer chromatography to sophisticated instrumentation such as gas chromatography mass spectrometry (GCMS).

The Trace Unit is responsible for examining evidentiary items that are observed and collected by laboratory staff at crime scenes and by outside agencies. Trace evidence covers a wide range of analyses such as fire debris (arson), gunshot residue (GSR), physical matches, shoe and tire impressions, and general physical and chemical unknown samples. This unit analyzes evidence items from a variety of crime types from tampering cases (food and material items) to robberies and homicides using a variety of instrumental and analytical techniques including microscopy and gas chromatography mass spectrometry (GCMS). Analysis of trace evidence samples is used to associate victims and suspects with evidentiary items at crime scenes.

Analysts in this unit perform examinations of bullets, cartridge cases, firearms, toolmarks, and tools. These examinations involve microscopic comparative analysis to determine if bullets and cartridge cases were fired from or cycled through a known firearm, or if a toolmark was made by a known tool. Other examinations may be performed, such as: firearm function testing, California Assault Weapon determination, and processing of duty weapons following an officer-involved shooting. In cases where no suspect gun has been recovered, a fired bullet’s general rifling characteristics can be determined (caliber, number/width of lands and grooves, direction of rifling twist) and checked against a general rifling characteristics file, generating a list of firearms capable of firing that bullet. The Integrated Ballistics Identification System (IBIS) can be used to acquire images of a fired cartridge case or shotshell and search the National Integrated Ballistic Information Network (NIBIN) database for potential associations to other crimes; some international searches are also possible.

Field Operations - Crime scene management includes evidence identification, documentation, and collection of all types of evidence whether it is biological, trace, or physical. The following techniques can be used in the investigation of a crime scene: general and advanced crime scene photography (including time-exposure, macro, aerial, UV/IR, and ALS photography); latent bloodstain search, enhancement; and documentation; clandestine gravesite excavation; bloodstain pattern analysis; and gunshot trajectory analysis.

Laboratory Analysis - Latent prints can be found on all types of evidence. Many different techniques are used to visualize latent prints including a variety of powders, chemicals, lighting, and photographic techniques. This section also does restoration of obliterated serial numbers on firearms, vehicles, or other serialized items.

The Property Division Unit is a specialty division and is the Alpha and Omega of all evidence collected in the entire county of San Bernardino as well as outside agencies that request the San Bernardino County Sheriff’s assistance. This section is responsible for storing, maintaining and releasing, as well as the disposition of all evidence for the San Bernardino County  Sheriff’s Department and outside agencies, such as, Police Departments, other County Sheriff’s agencies, Highway Patrol agencies, District Attorney’s offices, City and County Fire agencies, Railroad Police  Departments, School Police, FBI agencies, and DOJ agencies.
The Technology Unit is responsible for the installation and training of mobile identification devices, iris/ mugshot capture cameras, supplying facial recognition, and providing the technical support for CAL-ID. Additionally, they continue to pursue the latest technological advances to enhance our efforts to solve crime. CAL-ID is often sought out to collaborate on pilot programs with the Department.
The Tenprint Unit is responsible for identifying subjects booked into jail, confirming the booking charges, and processing all AB109 commitments. Casework is related to identifying decedents, DMV cases, real estate fraud, and testifying in all 3 strike cases.
The Latents Unit is responsible for comparing latent prints from an unknown source, found at crime scenes to the prints of known subjects. This is done visually using various forms of magnification, and may include the use of the multiple AFIS databases when no known subject information is available.
Calendar
Loading view.