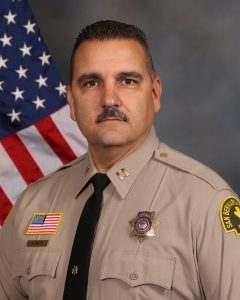 The Specialized Investigations Division is comprised of the Homicide Detail, Crimes Against Children Detail and the Polygraph Detail. These details investigate a variety of major crimes including homicides, suspicious deaths, in-custody deaths, officer-involved shootings, child pornography, child abuse, and various other crimes against children. Personnel assigned to the division are highly-skilled and experienced investigators who use the latest technology to investigate and solve cases.  Local law enforcement agencies can request investigators and department resources to investigate officer-involved shootings or major crimes.

The Homicide Detail is responsible for investigating all homicides, unexplained deaths, deaths of a suspicious nature and in-custody deaths that occur in the Department’s primary jurisdiction. Similar investigations are done in those contract city areas served by the department, as well as other police agency jurisdictions within the county, when approved by the Office of the Sheriff. The Homicide Detail also investigates all Lethal Force Encounters where a deputy or other member of the Department discharged his/her firearm or was involved in an altercation with a suspect which resulted in death. The Homicide Detail is also tasked with conducting “Special Investigations,” when a member of the Department or other agency in the county is accused of criminal misconduct as determined by the Office of the Sheriff. Every year, many investigations are brought to a successful conclusion with the assistance of the Sheriff’s Narcotics Division, Specialized Enforcement Division and the Sheriff’s Gang Team. These teams are critical in helping locate and arrest violent criminal suspects. The detail is made up of five sergeants, 22 detectives and two investigators. Four members are assigned specifically to working cold cases. The Cold Case Team currently has two Deputy District Attorney’s assigned for the sole purpose of prosecuting difficult cold cases. The Cold Case Team is partially funded through a federal grant specifically aimed at solving cold homicide cases through DNA. Since its inception in 2008, the Cold Case Team has solved 46 cold case murder investigations, dating back as far as 1981, using DNA and a variety of other investigative means.

The Crimes Against Children Detail specializes in the investigation of child sexual and physical abuse cases, child sex rings, child pornography, child exploitation, Internet crimes against children, abuse in which a foster family is the alleged perpetrator, abuse in which a daycare facility is the alleged perpetrator and other cases involving child victims where special investigative skills and training is needed. During the course of investigating these crimes, detectives work together with other agencies, i.e., Children and Family Services, the Children’s Fund Assessment Center, the Loma Linda University Children’s Hospital, Community Care Licensing, Los Angeles Internet Crimes Against Children and the district attorney’s victim/witness program.  The detail is made up of one sergeant, six detectives and one deputy sheriff. The detail is also responsible for developing, coordinating and implementing community and department goals and strategies to effectively mobilize efforts aimed at registered sex offenders and to ensure sex offender compliance. The Sheriff’s Department utilizes the Megan’s Law database. Within the Megan’s Law database, the public can search for sex offenders by name, address and city or compliance status. Megan’s Law database is a tool to ensure public safety and to create a link between law enforcement and the community. In addition to the Megan’s Law database, the Sheriff’s Department began using the California Sex and Arson Registry (CSAR) database to monitor, track and access information regarding convicted sex offenders. CSAR is utilized by law enforcement nationwide. CSAR is similar to the Megan’s Law database; however, it provides information not available in the Megan’s Law database and is used exclusively by law enforcement. In addition to conducting major child abuse investigations, members of the Crimes Against Children Detail are responsible for conducting weekly reviews of all child abuse related calls for service dispatched to each of our department’s stations. Detectives review all reports taken related to the call for service. In doing this, training issues are identified and the Crimes Against Children members are able to offer assistance as needed. The Crimes Against Children Detail spend nearly 300 hours each year conducting training for other law enforcement personnel on the proper investigative techniques to successfully prosecute crimes against children.

The Polygraph Detail has been part of the Specialized Investigations Division since 1996. As with the other details within the division, the Polygraph Detail provides support for criminal, administrative and background investigators within the department. In this role, members of the detail provide an integral and vital element to the successful investigative team concept.

Other law enforcement agencies may/and do avail themselves of the services provided by this detail. The Sheriff’s Department presently contracts with 17 different outside police and fire agencies. Other contracts are currently pending. The acquisition of state-of-the-art computerized polygraph instruments, bilingual examiners, and other personnel additions have been recently implemented in a measure to provide better service and product to law enforcement agencies throughout the region.

The function of the polygrapher is to assist an investigator in establishing the truth-telling profile of a job applicant, crime suspect, or the credibility of a witness. The polygraph can assist an investigator by giving direction on the investigation and assist in corroborating evidence and statements that may otherwise be difficult to measure. It is not intended to, nor can it replace, basic investigative techniques or evidence interpretation.