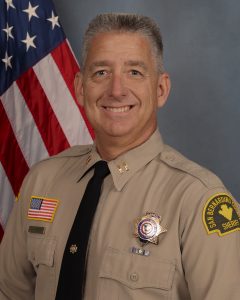 The Specialized Enforcement Division is comprised of specially trained and highly dedicated sworn and professional personnel who cover a range of specific enforcement areas. Personnel are organized into several teams and task forces to provide enforcement in disciplines requiring training and equipment not available to patrol deputies. The division is called upon for many elevated risk tasks such as S.W.A.T. responses, investigation of suspected explosives, elevated and high-risk warrant services, and apprehension of armed fugitives. Employees assigned to the Specialized Enforcement Division work as a cohesive unit to ensure the safety of the communities we serve.

The Arson/Bomb Detail investigates all suspicious fires within the sheriff's department's jurisdiction including fire-related deaths, insurance fraud, arson for retaliation and arson to conceal other crimes. The detail is called upon by fire agencies to assist with investigating arson-related fires. The detail and its members are accredited by the Federal Bureau of Investigations in handling explosive devices, military ordinance and unknown suspicious packages. The detail utilizes an explosive trained K-9, "Wolf" to detect a wide array of explosive odors and powders. The detail maintains one of the largest law enforcement explosive ordinances range on the west coast. The range is used by bomb squads throughout southern California. The detail also reviews applications for explosive permits and inspects permitted facilities.

The Sheriff’s SWAT team is a designated unit of deputies specifically trained and equipped to work as a coordinated team to respond to critical incidents including but not limited to, hostage taking, barricaded suspects, snipers, terrorist acts and other high-risk incidents. These incidents can be hazardous, complex, or unusual that they exceed the capabilities of first-responders.

SWAT personnel trains a minimum of 36 hours a month in crisis negotiation, marksmanship, non-lethal weapons, rappelling, airborne operations and hostage rescue tactics. SWAT team members are rigorously trained in the use of specialized tactics and equipment designed to promote the peaceful resolution of critical incidents. Many of the specialty skills derived from SWAT training are beneficial to members during their daily duties, which frequently bring team members in contact with violent and/or armed suspects.