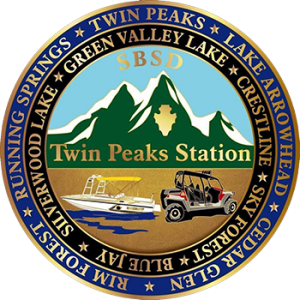 Located in what has been described as the “most highly urbanized” forest in the world, the Twin Peaks Station covers over 135 square miles of territory, the majority of it within the San Bernardino National Forest. The patrol area stretches from Lake Silverwood to Lake View Point and includes the towns of Crestline, Lake Arrowhead, Running Springs and numerous smaller communities and neighborhoods. As well as being home to nearly 35,000 regular residents, the popular resort and recreation destination can sometimes have a daily population that swells to over 85,000 persons on weekends and holidays.

Currently, the Twin Peaks Station has 17 sworn deputies, two detectives, five sergeants, and one Captain. In addition, the station has seven professional employees.

The emphasis of the Twin Peaks Station is public safety and crime reduction. To that end, deputies adhere to the Community Oriented Policing and Problem Solving (COPPS) model of community policing. Their mission is not to just react to crime and public concerns, but to go out and pro-actively seek out issues and find solutions in partnership with the community and allied agencies. Their goal is to reduce and, if possible, eliminate criminal activity and public safety issues before they become a problem.

Marine Enforcement teams, who provide patrol on both Lake Arrowhead and Lake Silverwood, are commonly seen on the local waterways. Also, Off Highway Vehicle teams are often seen patrolling the national forest area within the Twin Peaks Station jurisdiction. Both programs are grant funded with no additional cost to the local tax payers.

Additionally, there is the Major Enforcement Team (MET), which focuses on problem crime areas and one deputy assigned to assist the Probation Department’s AB109 Officer.

The Twin Peaks Station has a dedicated group of citizen volunteers who provide an immeasurable amount of services to the community. These volunteers include the Citizens on Patrol, Search and Rescue, Sheriff’s Reserves and Explorer Scouts. These groups donate tens of thousands of volunteer hours to the residents of the mountain communities. Although affiliated with the Sheriff’s Department they are largely self-sustaining. Funds for equipment and programs are raised through events such as the annual Twin Peaks Sheriff’s Station Volunteer Golf Tournament held at the prestigious Lake Arrowhead Country Club and the Citizens on Patrol wood program.

It is the mission of the Twin Peaks Station to provide the highest level of service to residents and visitors alike and to make the mountain communities a safe and healthy environment.