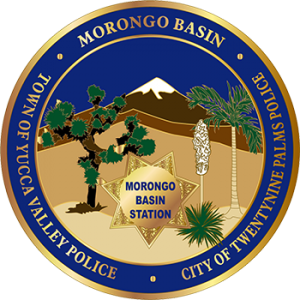 The Morongo Basin Station is the third largest Sheriff's station in both area and total number of calls for law enforcement services in San Bernardino County. Within the station's area of responsibility are the incorporated communities of Twenty-nine Palms and the Town of Yucca Valley, as well as the unincorporated communities of Morongo Valley, Landers, Johnson Valley, Joshua Tree, Wonder Valley, Pioneertown, Amboy, Cadiz and Flamingo Heights. The station is part of the county's Law and Justice Complex located in Joshua Tree. The facility there also houses three courtrooms and a "Type I" jail capable of housing 79 inmates.

Recent annexation efforts now place the main side of the world's largest United States Marine Corps base within the city boundaries of Twenty-nine Palms (known now as the Marine Air Ground Task Force Training Command). Providing police protection to the military personnel there is a well-trained Military Police Department who serve under the command of the base Provost Marshal (PMO). The San Bernardino Sheriff's Department has joint law enforcement jurisdiction and authority on the base and works hand-in-hand with the PMO and investigators from the Naval Criminal Investigative Service.

In order to meet the needs of such a diverse area, the station relies heavily on the many human resources of the community those who are willing to partner with the department in its public safety mission. As a result, the station has some 200 members in its various Volunteer Forces organizations. Volunteer units such as Uniformed Patrol Reserves, Search and Rescue, Mounted Equestrian Search and Rescue, Explorer Scouts, and seven separate Citizen Patrol Units, work in support of uniformed patrol deputies to provide a dynamic and community-based law enforcement service. Additionally, the geographical diversity of the area requires innovative approaches to the specific concerns of the citizens. One such approach is illustrated by the recent formation of a station Off-Highway Vehicle Enforcement Team, which consists of uniquely trained deputies who operate Kawasaki dual sport motorcycles to enforce laws regulating the ever-expanding hobby of "off-roading," together with public awareness.